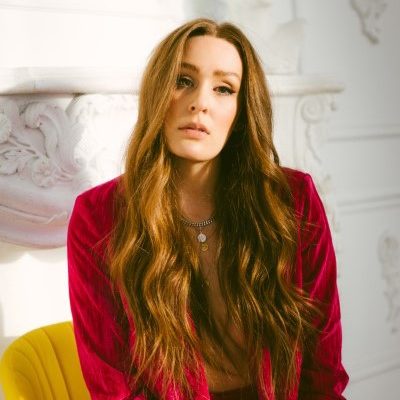 “‘Palo Santo’ represents a magical little moment in my mind where it’s just you and someone else, and the rest of the world just kind of pauses and disappears, leaving you feeling like you’re in a sort of breathless vacuum for a brief moment in time. That moment and that intimacy is what the song is about.”

Check out “Palo Santo” below and find out more about Amanda via our Five Questions With segment.

Oh gosh, where to even start. Hi! I’m Amanda Frances. I’m a lyrics-obsessed, overly ambitious, naturally-redheaded electropop artist from Toronto with a popcorn addiction. I just released my new single, “Palo Santo,” and there is a TON more new music coming out very very soon that I am beyond excited to share with you.

Lyrics are definitely at the core of my writing. From a super young age, I was obsessed with words and was constantly writing my own poems, lyrics, and songs, and that’s definitely shaped how I write today. My songs almost always start with a lyric. If I’m writing by myself, I’ll often sit down for half an hour or something at a time and just kind of free-flow write what I’m feeling or thinking – it almost feels like a journal entry at the time. Chunks of that usually end up being sections of the song without me even realizing at the time that I was writing the lyrics.

The process is usually pretty similar if I’m co-writing. Sessions usually start just chatting about what’s going on in life, and usually, a lot of the lyrics are kind of just hidden in those conversations. Allowing that honesty and emotion to come through in its most raw form is literally the most important thing to me when I’m writing.

Keeping my family and my loved ones safe this year has obviously been my number one priority, so unfortunately live shows are currently on a bit of a hold. But I’m dying to get back on stage and will probably tackle-hug the first person to hand me a microphone when we’re on the other side of this. I’ve been having a lot of fun connecting with everyone over my socials in the meantime, and have some really fun IG takeovers coming up where I’ll be giving a sneak peek of some of the new music that I’ll be releasing very soon. So, I’m really looking forward to that, and to eventually getting back to dancing around on stage!

Palo Santo! Especially if you go watch the music video I just released for it. There’s a fun little plot twist in there. I still squeal-giggle every single time I watch the very last shot. Watch and you’ll know what I’m talking about (wink).

Oh myyyy… there are so many ridiculously talented musicians from Canada that I absolutely ADORE. I’ve been a huge fan of Lennon Stella and Jessie Reyez from the get go. Both of those girls are insane songwriters, and I’m constantly blown away by their artistry. I’m also really digging all the new music coming out from some other dope Toronto artists these days, especially Jesse Gold and Your Paris – both their new singles are a jam.