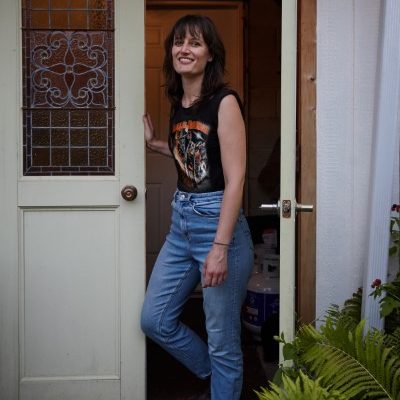 Toronto, ON-based artist, Claire Whitehead released her single, “Come on Friend” from her incredible project called Thelma: A Country Opera which melds the worlds of music, film, and pop culture.

Taking the stage, Whitehead guides the audience through a series of country songs – each lending their own narrative to the powerful evolution of Thelma’s character from the 1991 cult classic – Thelma and Louise. Not only do the songs capture key moments in the character’s journey – but there is also a visual element where clips from the film will be interspersed with the music to further highlight important moments of Thelma’s feminist awakening.  From innocence and confinement to independence and an outsider life – the evolution is simultaneously beautiful, strange, and heartbreaking as we are taken for a ride with Whitehead into the deep dive of Thelma’s relationship to Louise as she becomes both stronger in herself and closer to her partner in crime.

Check out “Come on Friend” below and find out more about Claire via our Five Questions With segment.

Hi, my name’s Claire Whitehead and I’m an interdisciplinary musician from Toronto. I’ve been making music in local rock, folk, and experimental groups for over 10 years, such as Forest City Lovers and Blimp Rock. I released my first songs under a rock band named Carew, in 2018 and now I’m putting out a series of country songs based on Thelma & Louise, in a project called Thelma: A Country Opera.

I write music when I get inspired by films, art, books, nature, and feelings. At the time that I saw the film, Thelma & Louise, in 2017, I was playing around with singing country songs and the film seemed to fit that genre well. So, when I was struck with feelings about the meaning of Thelma’s character arc, I started coming up with songs about it. In that sense, I write with a key idea or feeling in mind. I come up with words first, then find some chords that lead it in the right emotional direction. Country music is a great genre to start with words because it’s very narrative, so it really feels like you have something to say and somewhere to go with a story and it feels sort of confessional.

It’s been hard because of COVID. I did perform Thelma: A Country Opera in 2019 and had a really great experience. It’s a very strange performance because I incorporate film clips from Thelma & Louise, as well as a bit of violin looping and spoken word, to create a sort of emotional unity throughout. I also dress in costume and slowly change style throughout. It’s very weird. But each time I performed it I received surprisingly positive feedback! I performed this once over Zoom through the Glad Day Bookshop’s TV channel, which went well, considering the limitations! To find out about any future streaming performances, you can follow my Instagram page and my Bandcamp.

The one I’m releasing this week. It’s called “Come on Friend” and it’s about transformative, loving friendship. It expresses the moment in Thelma & Louise when all of their money gets stolen, they’re on the run and Louise has lost all hope. This awakens a fierce commitment in Thelma to change her passive nature and find a solution for the two of them. It is about caring enough for a friendship that you can allow it to change you, as you both grow together.

My all-time favourite Canadian band that hits my heart and inspires me always is Land of Talk. Liz Powell has beautiful originality in her guitar playing and heartfelt singing. The other artist I’m really excited about is Kelly McMichael, she is a member of Sarah Harmer’s band, and is a fabulous singer and proficient musician. She’s releasing a solo album I think in the next year.