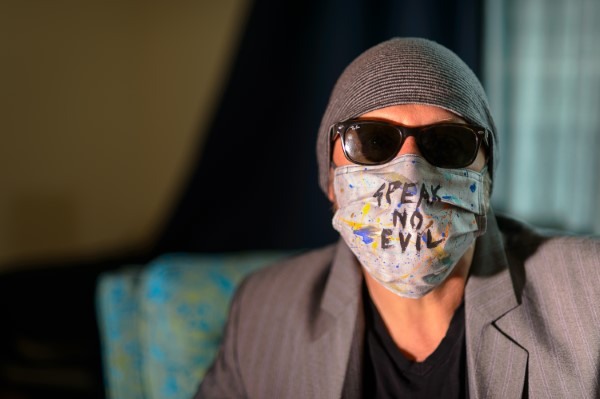 The 11-track offering is a blues foundation stacked with layers of psychedelic rock, pseudo flamenco with a surf edge, and a thread of jazz throughout the ages wound around it all. The LP mines the archives of the critically acclaimed and internationally accomplished artist’s long-spanning career, including with The Tony D Band and MonkeyJunk.

“This is the only new song on the album,” Tony D says of “70s Big Muff.” “The title is a nod towards the fuzz pedal that was used to create the 70s style of psychedelic rock made by the likes of Jimi Hendrix and Cream. It’s been a big influence on my music from the beginning of my career.”

Speak No Evil rises to the top as the guitarist’s most impassioned collection of both early and current works, including the newest addition to his repertoire, “70s Big Muff” — and arguably the reason the album exists in the first place.

“I wrote and recorded this song on the spot last year in the studio with my band, Joe Hawkins and Mary Gellner. I think the version that’s on the album is the second take. It sent me into a bit of a time machine of my instrumental recordings over the years, and was the impetus for making the compilation.

“Why now? After recording ‘70s Big Muff,’ I realized how many instrumentals I had recorded over the years, and that I had a body of work worthy of compiling. I love the sound of guitar, I love instrumentals, and I love the different formats in which these sounds weave in and out of each other to make a nuanced piece of music.

“I always thought Speak No Evil would be a great title for an instrumental album because, obviously, nothing is spoken on the tracks,” he finishes. “But also, it’s about not speaking hate, being good to people, and spreading love.

“That’s what music is about to me: Spreading love.”

Check out “70s Big Muff” below and find out more about Tony D via our Five Questions With segment.

Hi, my name is Tony Diteodoro but I go under the stage name Tony D, for obvious reasons. I am the guitarist for The Tony D Band and Juno award-winning, MonkeyJunk.

I have been mostly a blues writer and player but in my latest recording, I have showcased that over the decades my musical journey has led me down many other paths including flamenco, gypsy jazz, instrumental jazz, funk, surf, and even psychedelic rock. I’m a guitar lover and so essentially my music style is heavily influenced by my love of that instrument and the diversity of a blues foundation in allowing me to improvise in many musical forms.

Hahahaha. We try to present live music in any way possible that is safe. Mostly that has meant a few live streams. I do have a few actual in-person live shows coming up in October but alas the COVID tides may once again lead to the cancellation of those shows. I’m used to and have done quite a bit of touring and live performing but for months now I have resigned to the fact that I will not be able to perform live shows until the summer of 2021. But watch for the music industry to start creating new ways for fans to consume “live” music and we will be all over that.

Not only is there diversity in the genre of my live shows but there is a diversity of energy level. I will take you from frenetic to romance. You will dance, you will sway, you will kiss the one you came with or leave with the one you didn’t.

On this album, Argentinean Surf Tango. It surprises people. Especially people that have followed my blues career. My exploration of flamenco has influenced my music so much that it is great to show people how it can weave in with surf, tango, blues, and gypsy jazz. I love doing that.