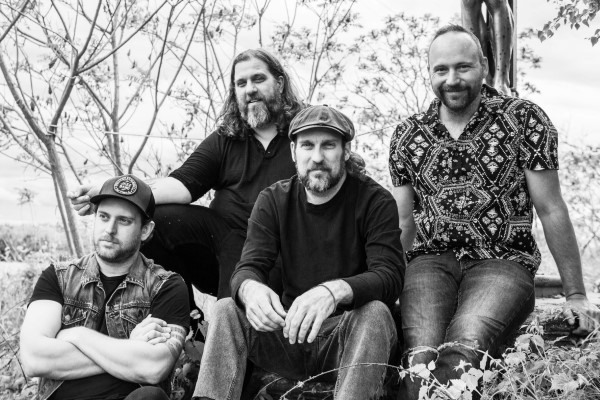 Montreal, QC-based francophone punk-rock band, Gros Soleil has released their debut album, Occulture Populaire via Indica Records. The album delivers 9 songs with cranky guitars, fast pace rhythm, and high pitch delivery from lead vocal Dominic Lamoureux. In advance of the release, they had unveiled 2 singles, “Cercle de sel” and “Dans une fusée“, but now you can hear them all below. Check it out, and find out more about the band via our Five Questions With segment.

We’re 4 guys, playing ”fist in the air/feet stompin”’ rock, who aren’t afraid to be inspired by different generation and style of music, from boogie blues to classic rock, from 70s and 80s punk to grunge, metal, post-rock, stoner rock, everything that have authentic energy and intentions. We’re passionate and making the kind of music we’d like to hear, not just surfin any ”a la mode” wave 😉 We’ve been in numerous different bands, since the early 2000s.

We like to call it ”audio pop art” ;). We often start a jam by saying: ” we should try to do a song like WEEZER” so we kinda analyze their chorus, verses, bridges, and vocal melody/arrangement as a starting point, and the jam can go in various directions but the blueprint, the backbone was that ”Like Weezer or like a Stooges song” starting point. For the lyrics, Dominic the singer writes with a global idea, often with a first or second-degree social criticism. Sebastien on the lead guitar sprinkles some insane and willingly cheesy solo, so it can be fun to whistle along haha and Christian on bass just groove his soul with a punkish attack. Voila!

We don’t have a show until 3 to 4 months, my brother (the singer) is having an operation, he has to recover. Meanwhile will surely jam and write other songs and being back on attack for summer festivals etc, just follow our Facebook to know. Our live performances are blood, sweat, and no tears haha. Energic, intense, fun, sometimes/often faster than the album version because we are on fire, too happy to be there having fun between us and the public, its contagious!