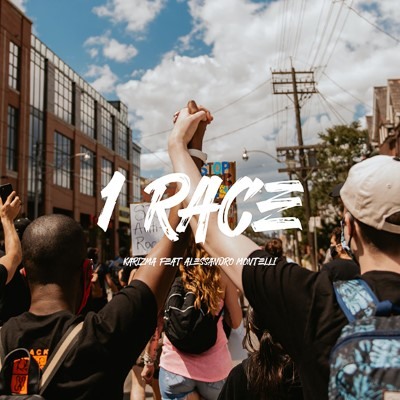 “This is a song that represents the change we want to see in the world right now,” they say. “It’s inspired by everything that’s been going on in our world with police brutality, racism, and injustices.

It also looks at the tough times, especially recently, and is wishing for everyone to stay safe and keep social distancing for a better world to minimize the spread of COVID-19.”

Having met in April 2020 during a street performance in partnership with Kisani Hub and Canadian Stage, Montelli jumped at the chance to work on the song that had yet to be finished by Toronto-based rapper Karizma (Brent Doctolero). They recorded in Montelli’s home studio with final production credits extending to James Taylor (Jay-Boz) and mastering by John Longley.

The collaborative foundation of the track doesn’t end there; the song’s first video is a lyric visual and features a compilation of videos from the pair’s fans around the world, as well as recognizable faces from the Canadian scene such as Ezra Jordan, Mike Ruby, Max Parker, Lorraine Lawson, Crash Adams, Nicole Haber, Sheena Osman, Sarah Jordan, Matt Von, Devin Moody, Joshua Sade James, MC Sulek, RRAQS, and more.

“Also, my friend and photographer Daniel Dorta, who edited the first video, had participated in one of the peaceful protests in Toronto and has some shots from the event,” Montelli adds. “I asked to pick one for the song’s cover art and, as you can see, it worked out perfectly; we couldn’t have found a better shot to represent the song and the movement we’re trying to create.”

“For the video concept in general, it wasn’t about us being in front of the camera,” Karizma shares. “We didn’t want to make an official music video because, for us, it was all about the message of the song; we wanted people to just focus on the lyrics.”

“But people were reaching out to us and wanted an official one!”

The result is a secondary video release, filmed and directed by Renjie Li and Akiem Ra-Zhi, featuring on-the-ground footage from this summer’s #blacklivesmatters protests downtown Toronto.

Check out the video for “1 Race” below and find out more via our Five Questions With segment.

For those of you who don’t know me, I am an Italian Canadian singer-songwriter. I was born and raised in Italy, but I was influenced by Canadian artists my whole life. Having family in Toronto I had the chance to visit them every 4-5 years until I decided to move here permanently in 2016.

Music has been in my life since I could ever remember and has helped me get through everything.

I started writing songs when I was 15, and before that, I would still write poems. Everything I write is based on personal experiences and struggles. My music has evolved a lot in the past few years from Pop Rock to Alternative Pop.

My next show is Wednesday, September 23rd at Freeplay on College St. in Toronto

Right now I would suggest “1 Race”, my new release has a very deep message of equality and unity that I think everyone should hear especially during these times!

Some of the Canadian artists I’ve been following recently are Neon Dreams, Tyler Shaw, Scott Helman.