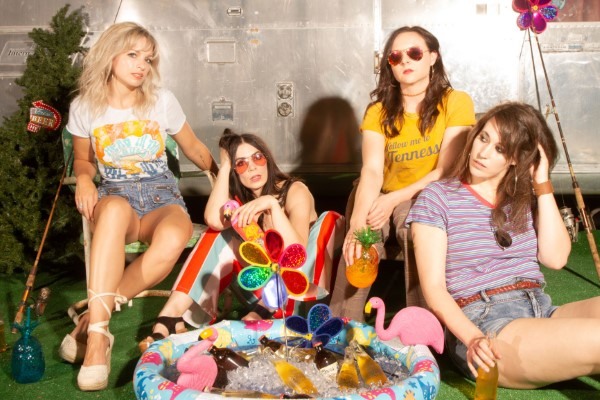 The ladies of Nice Horse have a lot to celebrate this year.

The country foursome earned a CCMA Award for Interactive Artist or Group of the Year and for becoming this month’s iHeart Radio Future Stars. The group formed nearly five years ago with close friends Brandi Sidoryk, Katie Rox, Krista Wodelet, and Tara McLeod – on a girl’s trip to Hawaii that turned out to change their lives.

We caught up with the ladies of Nice Horse to reminisce about the early days, their position in country music, and their killer new single.

Take us back to the first time you began to make music together. How quickly did you realize your chemistry was something you wanted to build on and create a career for yourselves?

BRANDI: Krista, Katie, and I had been friends for a long time prior to the first days of Nice Horse—and we were very involved in each other’s lives musically—Krista and I were in a different band together. Katie and I would have weekly “music meetings” over sushi where we would help each other brainstorm business and marketing plans for our individual musical projects. Katie was my former band’s social media coordinator. I played bass in Katie’s backing band. We were so completely linked in so many ways—but never when it came to actually creating music together. When we actually started making music together, we were in Hawaii on a girl’s getaway that suddenly morphed into a songwriting retreat, where we wrote 17 songs over the course of a week. Once we started writing together that week in Hawaii, the chemistry was immediate. And when Tara joined the band two years after that trip, the chemistry when from immediate to electric. It’s crazy to me, when I look back, that Nice Horse really was under our noses for so long, and we didn’t even notice. I am just thankful that we figured it out eventually!

Let’s talk about National Country Music Day. What has country music meant to all of you?

BRANDI: Country music definitely means something a little different for all of us. it’s one of the things I love most about this band—country music has definitely been a different piece of the jigsaw puzzle of each of our musical journeys. For me, country music has always been a corner piece—country music is the music that made me. It’s been my foundation. It’s what I listened to in my childhood, what I learned to sing harmonies to in the car with my mom and my grandma. And after discovering and working in many other genres (from my degree in opera to playing in indie rock bands), it’s the music that I was drawn back to. Country music has always been the anchor throughout my life, and there is no place I feel more at home than in country music.

Talk to us about your place as women in the music industry, especially in the country scene. It’s been talked about in recent years the difficulties women face in the industry to reach the same level of success and respect often given to male artists without a second thought. Have you experienced these challenges in your career? Do you see changes happening?

BRANDI: I mean, I would be lying if I said that I didn’t feel these difficulties in my career. Yes, they exist. And yes, they are disheartening. However, I am the member of the band that feels like everything can be a positive opportunity, if you look at it through a different lens (and if you think that this is a good trait, try being in a band with me—endless motivation and optimism can be quite infuriating at times, haha!) The truth is, that although we have had to endure some frustrating challenges to forge ahead in music, it has made us a better band: because we have to be. For us to push through the obstacles that women face in the music industry, we can’t just be as good as the rest. We have to be better. Undeniable. This has formed the four of us into one of the hardest working group of musicians and business people that I have ever had the pleasure of working with. We may have to work harder to get where we are, but because we have already had to, we know that WE CAN. I think that it is important to take stock of the positive things that come out of a bad situation because if you don’t bitterness can creep in. And if there is anything more effective at keeping someone down than outside forces, it’s a negative attitude coming from the inside.

But you know what? Things ARE changing. Small steps are happening. For a lot of us, the movement doesn’t feel fast enough, but changing the mindset of an entire industry takes time. As long as we get to where we are going (which I feel is equal opportunity for everyone who wants to be in music), any change in the right direction, big or small, is a good one.

How did you feel when you received your CCMA nomination?

BRANDI: It’s hard to describe what that feeling is. Award nominations are always such an honour. The CCMAs, though, are special. I know for both Katie and I, we grew up watching the CCMAs, dreaming of someday being there, of walking up onto that stage. To be nominated for something you have dreamed of your entire life is a deeper excitement. It feels cumulative: like Brandi in 2020 and Brandi at 10 years old are both feeling the gratitude for the nomination!

Alright, let’s talk about Cowgirl. It’s such a fun summer track, was it as much fun to write as it is to listen to?

BRANDI: Cowgirl was SO fun to write—but maybe not in the way you’d expect! It took us a while to really pin down how to get across the message of this song. We really wanted Cowgirl to say what we in Nice Horse feel: that country music and being a cowgirl is for everyone, and everyone is welcome. We wrote this with our friend Jason Blaine, and he was also very onboard with getting that message across. It took us so long to figure out how we were going to say it, batting ideas back and forth in the writing room, but once we landed on it, we burned through the actual writing of the song took us half an hour. The result was a song that we absolutely loved. This song was fun to write because we’re proud of what it says.

Have you been writing more songs during this time off? And if you have, when do we get to hear them?!

BRANDI: It took me a while to get into writing songs in the beginning. We were on tour in Switzerland when we got word to come back to Canada, so we rushed back and into self-isolation. I had two weeks alone in my house to write…and I just couldn’t. I felt a little shell shocked from all of it, and it took me a while to get into a headspace to write again. I am happily back to writing now though! The horses have a weekly songwriting session on Zoom, which helps us to be productive in our songwriting, and also get the chance to spend (virtual) time together. We do have lots of songs in the works to be released! For sure more music to come in 2021, but I have it on good authority that we may have a little surprise release before the end of the year…that can be our little secret ; )

Will you plan some live shows to showcase the new music as soon as you’re allowed to?

BRANDI: We miss playing music together so much, and we miss each other. For Nice Horse, it has been especially challenging, as we live scattered across the country from each other. We went from spending every waking (and non-waking) moment together—in the tour van, on stage, in rehearsals. But we haven’t all been together since March. As soon as we are allowed, we will be on that stage—not only will it be a reunion with our fans, but it will be a reunion for Nice Horse.