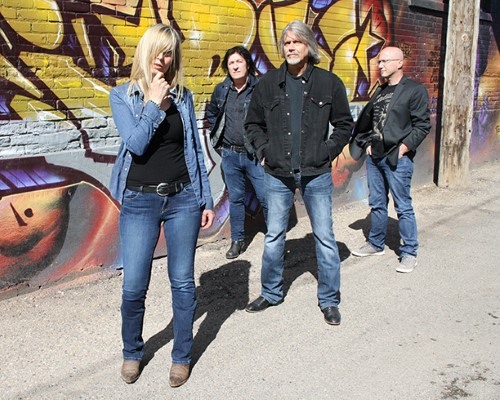 Canadian alt-country rockers Tucker Lane have unveiled their new single, “Paper Wings” along with a lyric video for the release.

“This song is about taking a chance on love, even though you might get burned,” the band says of the track’s meaning, begging the question: “Is the fire going to be uplifting? As in a spark? Or will it be devastating, like a house fire?”

Featuring Platinum- and Gold-selling The Pursuit of Happiness and Universal Honey alums Leslie Stanwyck and Johnny Sinclair, as well as Brent Carlin and Warren Medernach, the song lands ahead of the award-nominated Americana act’s forthcoming album, available this Fall.

The release follows both Tucker Lane’s debut 2015 offering, West of Minnesota, North of North Dakota, as well as a lengthy separation due to COVID-19.

“We made it a point to follow the guidelines provided, and when we first began rehearsals for completing the album, we all included each other as part of our social bubbles,” Stanwyck shares. “It had been a while; after the lockdown first started in March, the band didn’t see each other until June. Getting together after a long separation fuelled a level of inspiration and creativity we feel is evident in the finished album.”

Check out “Paper Wings” below and find out more about Tucker Lane via our Five Questions With segment.

My name is Leslie Stanwyck and together with Johnny Sinclair, Brent Carlin, and Warren Medernach we are known as Tucker Lane.  We are from Saskatoon, Saskatchewan.  We just released our first song “Paper Wings” from our soon to be released second album.  Johnny and I were originally in The Pursuit of Happiness (Love Junk and One-Sided Story) and then went on to form Universal Honey and put out 7 independent albums.  We then moved from Toronto to Saskatoon in 2010 and met up with old friend Brent Carlin and started playing music together.  Brent (we call him BC) and Johnny had known each other since the sixth grade and shared many musical memories together, like jamming in BC’s basement in high school.  Brent plays a mean slide guitar as well as many rock ‘n’ roll/blues styles.  He’s also a pretty good country picker.  In 2017, drummer Warren Medernach came into the group and brought a new energy.  Warren sings as well and keeps the pocket big on the bottom end.  A lifelong musician, who has been playing around Saskatoon in many bands and came highly recommended.  In the studio we added multi instrumentalist Sam Derbawka who added mandolin, pedal steel, and violin in all the right places to complete the sound we were looking for.  This production was made possible with the support from Creative Saskatchewan’s sound recording grant program.

Well, our music is based in pop, 60’s, 70’s am-radio, and album rock.  We love all genres of music.  When we started playing in Saskatoon a lot of people asked us if we played country music.  We didn’t have any songs in our setlist in the beginning, so we started incorporating songs by Lucinda Williams, Steve Earle, and Miranda Lambert which worked well with our Roots/Americana sound.  People say we sound like Tom Petty and the Heartbreakers with Chrissie Hynde from the Pretenders singing.  Another strong influence is the California paisley underground sound which drew a lot of influences from bands like the Byrds and Buffalo Springfield that blended pop and country.  Some songs are written on acoustic guitar, as well as, we jam out a lot of ideas with the band.  We often try out different writing processes as we can either start with lyrics or with a melody.  We also love collaborating with other writers.

Sadly, all of our shows have been canceled due to Covid-19.  We like to play live as much as possible and don’t turn down many gigs.  When quarantine first started, we did a couple of lockdown videos.  When it was safe to expand your bubble the band included each other and we started getting together to jam, write and record.  We’ve filmed a music video and did a live backyard performance that we recorded to multi-track with multiple cameras and are just in the process of putting it all together.  We plan to release the performances in the upcoming weeks.  We’ve called it the Campfire Sessions.  Next Tuesday we’re doing a Facebook Live to premiere the new music video for “Paper Wings”.  We will be doing Live Streaming events through the fall and winter from various locations around Saskatoon.  Tentatively the first one will be mid-October to coincide with the release of our album.  We are a 4 piece band, 2 guitars, bass, and drums and we like to kick it out.  We work hard to put on a good high energy tight performance.

I would proudly direct them to listen to “Paper Wings” out now from our upcoming album.  The song to me best represents Tucker Lane right now with its jangly guitar sound and lush production.  So far, it’s still fresh and it’s getting awesome feedback, which feels great!

The Sadies, Junior Gone Wild, The Band, The Trews, The Foreign Films, The Nines, Sam Roberts, Rush, Joni Mitchell, The Deep Dark Woods, Smokekiller, 54:40, Neil Young, Junior Boys… there are tons of them!