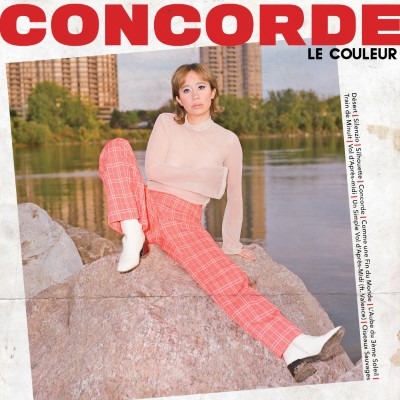 The latest release, Concorde, from francophone pop trio Le Couleur is a funky and futuristic take on the classic disco sound of the 1970s. Over the course of ten songs, the Montreal-based band, fronted by singer Laurence Giroux-Do, takes the listener on a smooth, synth-laden journey of disco and funk through a 21st-century lens.

The overall tone of the record is that of a classic electro-funk record of the late ’70s, with more disco-inspired vocals, filtered through a 2020 vaporwave aesthetic that proves a very effective crossover point between two eras. Much of the album features strong, percussive funk-style basslines driving underneath shimmering, reverb-heavy synths that construct the space within which the instruments play. A prime example of this can be heard on the record’s second track, “Silenzio”. The band explores several other themes on Concorde, as well, touching on some more progressive or psychedelic influence on the opening track, “Désert”, which breaks down in its second half into a jazzy, spacious section that evokes strong memories of Pink Floyd.  “Comme Une Fin Du Monde” is another standout track on the record. This song trods along to a simple, echoey piano melody while Giroux-Do her bandmates softly and hypnotically guide the song forward with their vocals. As well, the companion tracks, “Train De Minuit” and “Vol D’après Midi” (“Midnight Train” and “Afternoon Flight”, respectively) act as a sort of call-and-response, highlighting the two spaces the band is able to occupy. Those spaces being that of the upbeat, reverb-heavy, conga-playing disco space that “Train De Minuit” exists in. As well as the laid-back, mid-tempo wah guitar funk space, both contained within a bubble of warm, spacey synths.

On Concorde, Le Couleur have achieved the often difficult to pin down goal of bridging an old-school, largely by-gone genre of music like disco into the 21st century by applying modern production techniques and motifs. What the trio have come up with here on this album is a very well-executed and authentic-sounding response to late 70’s pop music that still has the signature of Le Couleur all over it.