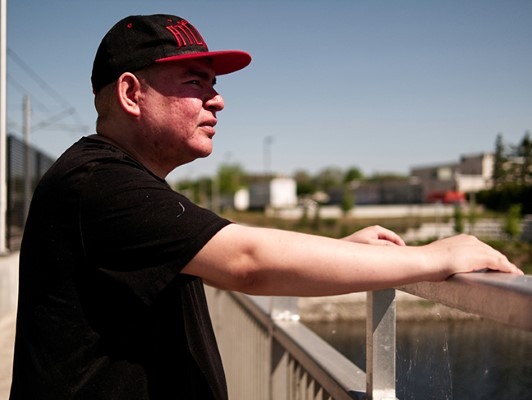 “This is the very first song I worked on in the Fall last year, and I finished it that winter,” he recalls of “One Last Time.” “It’s about losing a loved one.

It took me a few years to grieve for my grandfather. I had no words to express that grief in a song until that Fall. From there, I included the others I’ve lost as well.”

The single is from his upcoming album, Find Myself, which is set for release on October 2, 2020. Although PaulStar (aka Paul Napash) has been nominated for an International Indigenous Hip-Hop Award for Best Producer & Beatmaker and is also the engineer, producer, and composer at the helm of the record label, PaulStar Entertainment, as well as releasing a series of critically acclaimed singles; Find Myself will officially put him on the other side of the desk or stage, being it’s the debut EP for his own music.

Check out “One Last Time” below and find out more about PaulStar via our Five Questions With segment.

PaulStar is nominated for Hip Hop Best producer/beatmaker, alt-contemporary rocker, who can play multiple instruments and also produces other artists or his own music. “I am known to be very musically inclined ever since I can remember. I played in several bands in my teens, I thought I could accomplish more independently.” Paul also runs PaulStar Entertainment, a growing company whose about to release a number of talented, Canadian artists. You find more info on my website www.paulstar-records.net

I grew up listening to the ‘80s and 90’s music, so Rock was all the rage back then, and it sure became a big part of my sound, from Elton John’s signature piano work to the legendary guitar sounds that GnR, Bon Jovi, Metallica, etc. On the production side, I’m also inspired by multi-award-winning producers such as Dr. Dre, Scott Storch, Young Fyre, Max Martin, Quincy Jones, Paul Epworth, Ryan Tedder, and many others.

While I did extensive touring back in my early days, right now, I’m focusing on building an online performance where I could play the songs, in a broadcast. I know I’ll be touring as soon as the risks go down, like many other artists, but until then, it’s a good time to produce music!

One of the first songs that are available for my latest music is One Last Time, which will give you an idea of how the rest of my music sounds like. All the instruments you hear are played all by myself. Everything was recorded in my bedroom using the advanced tools to make professional tracks. I use Cubase, Reason or Pro Tools and other audio plugins or software to build soundscapes that relate to what I loved hearing growing up.

My favourite Canadian artists/bands right now are Ryland James, Shawn Mendes, Drake, The Weeknd, Belly, Justin Bieber, Merkules, Alessia Cara, Buffy Saint-Marie, and on my artist roster I’m keeping an eye on Rob Webb (Country artist), as well as CJAY GRiZ (trap artist/producer) and Arrow (DJ/EDM Producer), three guys I’ve been working with that are bound to make some noise in their respective scenes. I’m still developing other artists that are signed to my label.