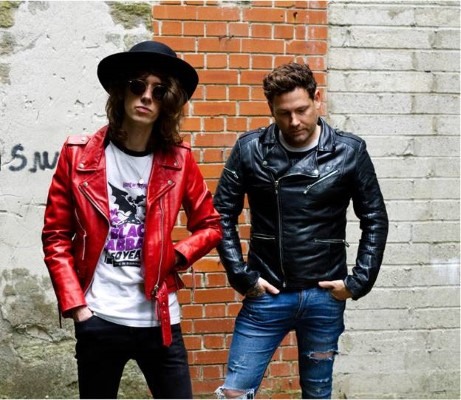 Canadian/ British alt-pop popsters Dead Romantic have released their single, “All Talk” from their forthcoming album, City of Thieves, set for release in early 2021.

The trio consists of Toronto-born/raised producer and lead guitarist Mike Krompass — formerly of or have worked with Nelly Furtado, Natasha Beddingfield, Steven Tyler, Theory of a Deadman, and co-wrote and produced the recent Honeymoon Suite record — plus Benjamin Owen on lead vocals and guitar, Scott Westervelt on keyboards, and features drummer Eddy Thrower (Lower Than Atlantis).

“We wrote this track and this record with absolutely no filter,” Owen sets down. “We wrote with just the pure experience of playing music around the world.”

“The single came really easily,” Krompass adds. “The three of us were sat in a room with my great friend and co-writer, award winning songwriter Steve Diamond. It felt like the song pretty much wrote itself. The melody came quickly, the lyrics flowed and the title just popped. The chemistry was amazing.

“We met through rock n’ roll, and that is the language we’re projecting in this project,” he continues. “Lyrically, we hope to inspire those in doubt and join those who reap.

Check out “All Talk” below and find out more about Dead Romantic via our Five Questions With segment.

It’s Mike K  from the band Dead Romantic, thanks so much for having us !!

I think that our band tends to be a melting pot of so many very different influences. We Definitely have pop sensibilities in our writing however rock is where our hearts are. Being the bands producer, I can’t help but throw in little hints to things I’ve learned over the years from working with so many diverse and great artists; like Steven Tyler, Nelly Furtado, Meghan Trainor, country or pop &  Rhythmic stuff so there’s definitely a melodic or pop sensibility to our songs… however being that we both come from a love of rock & hard rock ( and I’m a guitar shred lover) of course we can’t help there a degree of that influence in our songs. Ben and I see eye to eye on so many great classic and Morden rock influences.

I think the thing we do is just do what comes naturally and what suits the song without trying to make it specifically a certain thing. We have some songs that are super heavy and some that are quite the opposite but keeping some form of consistency throughout.

For us songs are like emotions, sometimes you’re up and sometimes down and we want to write what comes naturally from the band and us as humans individually. Our writing style is just never one thing,  although the process may be similar if how it all comes together.

We wish! This COVID thing has really put a damper in the plans, however, the moment we can schedule our tour, we’re all over it 😉

When we are able to play live again, you can expect a lot of energy, loud face-melting guitars/ drums, and a lot of vocal surprises. I think there’s definitely something for everyone at our shows .

Well, we only have the one single out at the moment “All Talk”, so we’d love you to check that out haha… But there will be many more in store for you all soon! 🙂

Well, being that Mike is Canadian, he should take this…

Well of course there’s the Canadian icons and classics like Bryan Adams, Alanis, Rush, The Hip, The Guess Who,  but Arcade Fire is great and The Weeknd is killer, Drake is a badass, I still love guitar bands like Harem Scarem (Pete Lesperance slays the guitar), and throw on old Haywire albums from time to time (sooo good), I Love Edwin and the boys in I Mother Earth, Honeymoon Suite (who is signed to my label & even have a new single doing quite well at the moment)  -I might be biased here ;), artists like Esthero and Kim Mitchell who can forget that guitar badass?

Canada has so many classic and emerging new talents that it’s so hard to play favs… I grew up with so much great Canadian music so it’s naturally embedded into my soul. I could list my favourites forever here.