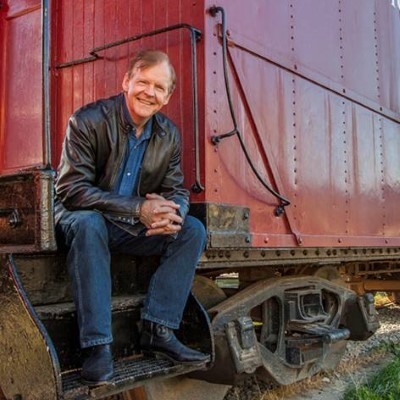 “I had the title floating around in my head for a long time,” McLachlan says of Heartache Motel and its origins. “When I wrote the song, it became the album title, too. From there, it was easy to fill in which songs I wanted on the album.”

The album features Julian Taylor, who was in Nashville at the time to perform at Americana Fest, as well as 13-time CCMA-nominated vocalist Lisa Brokop, and fourth place contestant on The Voice, Adam Cunningham.

The single, “Where My Heart Will Go” was co-written with Harpin Norm Lucien — Steeldrivers fiddler Tammy King cements its must-hear status, saying, “wow, this has a Jimmy Webb feel to it.”

“The inspiration for ‘Where My Heart Will Go’ was born out of a long-distance romance,” McLachlan shares. “It’s uncertain at the start, you know, so you’re wondering ‘is there something here.’ By the end of the song, I’ve decided there was.”

Check out the album below and find out more about David via our Five Questions With segment.

Yes, thank you for asking. I am a lifer, in terms of songwriting.  Made up my first song when I was 7 years old.  Just the one verse, but I still remember it. It was pretty bad, but it echoed what was on the radio at the time. My favorite group was The Dave Clark Five, having seen them on the Ed Sullivan Show, with the rest of the British Invasion. I loved the fact they used keyboards and saxophone, in the group.

I didn’t pick up the guitar, until I saw The Monkee’s on TV, around the mid to late ’60s. They always seemed to be having so much fun, with all the hijinx going on.  I was a very shy kid, so I’d be in the house, playing guitar for hours on end, while my friends were out playing in the park. Don’t get me wrong, I still played football, baseball, and road hockey with my friends, but the guitar and music really drew me in, and I stuck with it.

My first song on the radio was from a show I played, The Folk Arts Festival, at Northern Secondary. A classmate had a Sunday night show on CHIN Radio, and he taped it and played it on his show. It’s a song about a streetcar that used to end its loop close to the high school. It was a big hit with fellow classmates, I guess, because they used to take that streetcar to school, and then, they took it out of service. That was in 1973. It’s on the second album, Not A Through Street, released in 2015. That song has a long history.

So that’s some early stuff. I’m now eight albums in, and Heartache Motel is the latest. By the way, just finished writing twelve tunes, for album nine.  I’ve got a title, and I’m just waiting for the border to open, the air to clear, to head to Nashtown, to lay it down.

I took guitar lessons for a while, but it was not moving fast enough, so I quit and taught myself. My songs are in the singer-songwriter mode, I feel, and range from folk, to folk-rock, to country, a little jazz now and then. The last track on Heartache Motel is my first song with sax on it. He just killed it, when we recorded it, in Nashville. For my writing style, I‘ve been influenced by Neil Young. Who hasn’t? But I’ve got all the Joni Mitchell records, all the Steve Goodman records, all the Stan Rogers records, all the Bruce Cockburn records. Murray McLauchlan is another big influence.  Next to Stan Rogers, I’ve seen Bruce Cockburn in concert, the second most.

So my writing style is an amalgam, can I say that of all the artists I was a fan of and followed fervently. I’ve also been an active member of the Nashville Songwriters Association International, for over 30 years. If you want to get schooled in song form, structure, and all the rules, go join up.

Nothing booked at present, but I will play the new five hundred seater, at Massey Hall, when it re-opens. I played the last show at The Bluebird Cafe, in Nashville, on March 8/20, before the world went on pause.

If it’s me solo, just a guy with a guitar, sharing some songs and stories, and trying to make a connection. More on the intimate side.

If it’s me with a band, it’s just a pumped-up version of a guy with a guitar, sharing some songs and stories, and trying to make a connection. But still pretty intimate.

There’s a song on my fifth album, Reaching For The Sun, called In Fields Of Long Ago. It’s a song written about an experience I had when I was twelve, that I never forgot, and wrote about many years later, obviously, but it always stayed with me. It includes some family history, too, if you’re interested. My grandparent’s farm was expropriated by the Canadian government in the mid-sixties, so they could build the Ottawa International Airport. How Canadian is that?

Canadian Beats is all about Canadian music, so who are your current favorite Canadian artists/bands?

Julian Taylor Band has been cutting it up for some time. He’s got a new “solo” record out called The Ridge, which is doing extremely well. He also sings back-up on my new album, on a track called Land Of Quiet Home, a bit of Canadiana, if you want to hear that.

I’m a big fan of Tyler Ellis. He’s a prolific writer. I think he’s got a co-write or two on Julian’s new disc. He’s also got eight or nine records out. Some of it is off-the-charts funny. He’s got an amazing way with words.

And I just pre-ordered the new Neil Young disc, off his Archives site. But I’ve only heard one track, and it was killer.