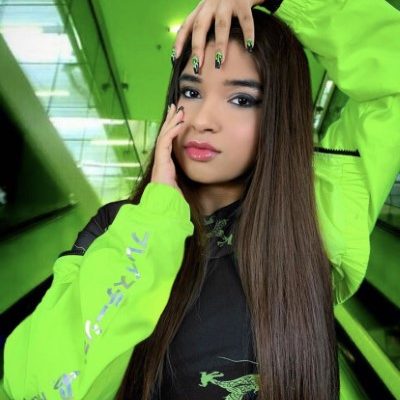 Toronto, ON-based singer-songwriter, Cmagic5 recently released her 3rd single entitled “Just Wanna”, and is working towards the release of her debut album later this year.

Check out the lyric video for “Just Wanna” below and find out more about this rising Canadian artist via our Five Questions With segment.

Hey there! I am an 18-year old emerging singer/songwriter/musician from Toronto, Canada professionally known as Cmagic5. Why cmagic5???  The “C” corresponds to the initial of my first name, which I may choose to reveal sometime in the future… sshhhh. The number 5 is my lucky number, being born on the 05TH day of the 05th month. Ever since I was little, I always hoped people would experience “magic” through music.

My passion for singing and performing manifested itself when I was very young and I was already performing to a ‘living room’ audience by the age of 05. The inspiration for writing songs was innate and I had written my first song at the age of 06. By the age of 10, as my articulation developed and matured, I had written and composed my very first original song with no help. The lyrics were very raw, pure, and straight from the heart, which set the very foundation to nurture my creativity as Cmagic5 and pursue songwriting and there was no looking back since.

Today I am proud to have earned my credentials as a Classical vocalist from the world-renowned Royal Conservatory. Being a vocal mentor, I am dedicated to helping youth amplify their voice in society, as well as on the stage. I am also grateful to be an Ambassador for Star Stuff Charity which is an organization with a mission to support teens with insecurities help build their self-esteem and promote mental well-being.

Musically, I have released 03 singles this year and I am humbled by the love and support I have received from listeners. This has definitely been a proud moment in my creative journey so far as I own my music completely from songwriting to composing, and from artwork to making and editing my own lyric videos. I also independently work on all my social media platforms to present and promote my brand, including designing my website.

My upcoming singles from my debut pop album releasing in Fall 2020, explore the themes of self-empowerment and love, rendering a positive message of self-confidence and freedom.

Music itself is a universal language. Being a musician, I feel it is important to explore different styles and genres.

While the genre of my music is pop, the uniqueness of my sound is created by fusing other sub-genres into my songs, such as pop/afrobeat/trap like my most recent release “Just Wanna”, or pop/orchestral/rock like “Outta My Head”, my previous release.

When it comes to my original music, I like to give every song a different vibe with its own identity through my own unique voice and songwriting style. By many, my voice has been defined as a cross-over between Toni Braxton and Dua Lipa.  My music is contemporary pop with a refreshing blend of old school vibes and futuristic sounds. While my music is suitable for all ages, its key attraction is amongst the Gen Z.

My writing style is vivid and direct to my listeners, conveying that the sweetest revenge is to smile, succeed, and prioritize yourself. My most recent single “Just Wanna“ tells a universally relatable story of a girl who lets the negativity in her life fuel the transformation into a better version of herself. This self-empowering Summer anthem is based on themes from the classic story “Alice in Wonderland” with a modern-day twist. “It’s no use going back to yesterday, because I was a different person then” (Lewis Carroll). Sincere and entirely relatable, my music communicates feelings of truth, freedom, and empowerment driven by evocative and captivating vocals. It encourages people to live their life to their fullest potential by singing along and express themselves through dance. This is revealed through my lyrics in my recent single “Just wanna” …

“This is your life, gotta live it right! “

Writing to me comes naturally through real-life experiences and I have my first R&B single brewing which I cannot wait to share with the world.

Though the live music and grassroots in-person variables are diminished right now, it has opened up a plethora of online avenues and live streams, reaching a geographically wider and diverse audience which I think is truly amazing in the midst of the pandemic!  I am humbled to have been selected for a couple of upcoming online shows such as the International Peace Festival 2020, Niagara Wine Fest 2020 to name a few I will be posting on my social, which you can check out at the bottom of the article.

Personally, I would describe my live performance as being energetic, high octane, and enjoyable! Such soulful vocals being generated from a petite frame, never fail to evoke a profound response from the audience who remain awestruck. The experience of a zesty uproar from the audience as the floodlights flash into a kaleidoscope of alternating colors on a live stage are indescribable in words as I transport the audience on a 3-minute journey to the exact moment of the song. Performing to an audience who enjoys my music enables me to feed off their positive vibes and my confidence builds every second I am on stage. I am overcome with feelings of exhilaration and ecstasy wanting to perform encore after encore and it really is the best feeling in the world! The interpersonal synchrony and social cohesion achieved through the power of music just blows my mind away.

Music is a quintessential element in society. No matter how or when we interact with music, it is symbolized with many important aspects in our lives. It could be an emotional expression, a celebration of life, or it could spark a reminder of someone or something.

Though all my songs have their own unique sounds and inspiring messages, I would encourage listening to my latest single “Just Wanna” a Summer bop, which offers a temporary escape with a buzzing freshness of summer through its catchy, modern pop melody built on a powerful Afrobeat. I wanted to create this spicy fusion hoping to encourage listeners to dance all their worries away, delivering a message of self-healing through the power of music.

Today for a relatively small country, it’s highly commendable to see the immense contribution to music out there, is homegrown right here in Canada and it certainly makes me a happy and proud Canadian. From bonafide legends such as Leonard Cohen to Bryan Adams to Justin Bieber, the list is iconic and endless. Among a 100 plus, one of my greatest Canadian musical influences in my life has been Celine Dion. Her vocal range and passionate style as well as strong work ethic have all inspired me during my musical journey.

The Weeknd is yet another one of my favourites who champions individuality as he chooses to be both lyrically and sonically different. His creative approach to music is exceptionally appealing which offers a medium of escapism.

My other Canadian musical inspirations include Drake’s laudable vocal contrast from hip-hop beats to rapping coupled with lighter accents and Michael Bublé as well who has the power to touch hearts with his romantic melodies and sentimental lyrics.