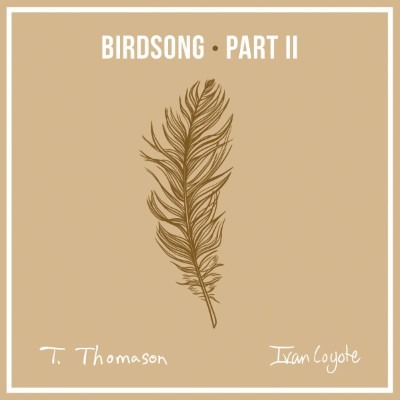 Thomason says of the song:

“When Ivan asked me to sum up Birdsong during our collaboration I said: “It’s about the dream of building your own freedom and eventually reveling in it;.. It is pretty overwhelming to hear “Birdsong Part II” come to life with Ivan. Back in 2014, a friend showed me a video of Ivan and Rae Spoon performing a piece from their project ‘Gender Failure'”. T. continues; “It was the very first time I saw an option for the type of human I could be shining back at me from a screen. Ivan’s words hit home in a way that I didn’t know was possible. I couldn’t believe someone was articulating feelings I hadn’t even figured out how to process, let alone express, in such a razor-sharp, honest way. In a way, that performance of Ivan’s set the wheels in motion. I was emboldened to step towards a different future for myself and to put words to what I was feeling. Writing the original version of “Birdsong” was a part of that process.”

“When T. first contacted me, I was so excited to collaborate with him. I sat down and listened to the track he sent me over and over again, to see what kind of words the music and lyrics would conjure up in me that would fit with the song;” shares Ivan. “On the fifth or sixth listen, I realized that I had already written the words down, just recently, in this piece I had titled Feather Armour. I wrote it for all of us who have to armour or shield ourselves from others who do not clearly see us for who we are inside. I feel like T.’s lyrics and my words kind of bookend each other, and function together like a sort of outside and underbelly of the same idea. They fit like puzzle pieces, and that is how I knew that I had picked the right words for that song. It just felt natural.”

This collaboration with Ivan is T.’s 3rd single from the Part II Project – a collection of reimagined songs from T. Thomason’s self-titled album released last September, featuring some of his biggest musical champions and mentors. In early April he shared a beautiful duet with Rose Cousins for  “King of Spades Part II“, and this past May a duet with Ria Mae for “Loser Part II“. Stay tuned for the final single of the Part II Project coming this Fall.

Thomason is a new kind of pop sensation. The U.K. born, Nova Scotia raised, Toronto resident flips the script on conventional under-dog tropes; his music eschews false positivity in favour of honest, gut-wrenching storytelling. His genre-bending self-titled album marries opulent arrangements with his “rich and full-bodied, soulful and earnest” vocals (NOW Magazine). The result? A sound that packs an emotional punch while begging you to scream along.