Review – Satellite and the Harpoonist 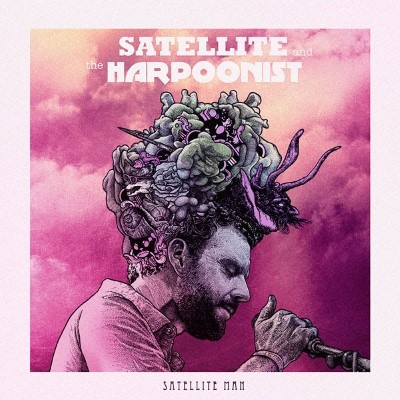 don’t know about you, but I sure like a well-constructed supergroup. Satellite and the Harpoonist is just that, being comprised of members from The Boom Booms, The Deep Dark Woods, and King Missile III, led by The Harpoonist and the Axe Murderer singer Shawn Hall. Satellite Man shows what happens when you unite such talents, and the result is pretty great.

Musically, the EP is much propelled by the rhythms of piano, bass, and percussion, as apparent early on during “Ballet in a Phone Booth.” A varied handful of other sounds is featured in addition—most notably, the “Pencilina,” a one-of-a-kind, zither-inspired instrument conceived of by Bradford Reed (who doubles on drums as well). You’ll know it when you hear it, and it adds a tinge of intrigue every time it shows up in a song. Lyrically, you get a singer whose voice has a jazzy edge of elegant flair, with a delivery that can be at times sincere, at others largely playful as in the titular track. Combined, the disparate components form a smooth blend of genres including elements of blues and folk, and even a slightly psychedelic rock transition during “Soul of the Sun.” It is an adeptly-layered EP. And in what is practically a requisite to being a Canadian musician, the group also pays homage to Neil Young with “Only Love Will Break Your Heart.”

These artists, enjoyable apart but uniquely so collectively, exhibit an appreciable range of aptitude. Check out Satellite Man, and see what together they have to offer.