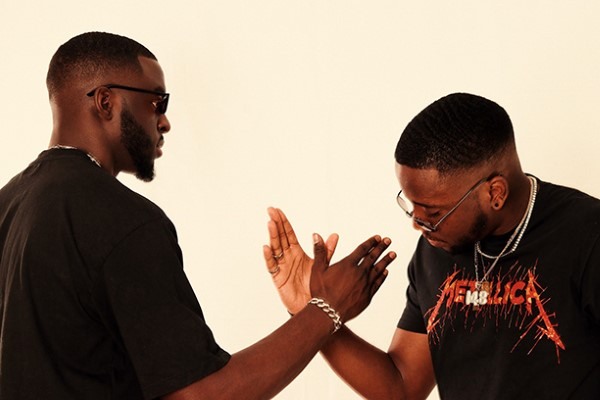 “‘Double Trouble’ was created in a studio bedroom with our longtime friends and producer, Jms,” Suertudo recalls of the song’s earliest start. “It was made on pure vibes, in anticipation of the 2020 summer.

This was before the world as we knew it fell apart!” McQueen adds. “But, in the midst of the pandemic, finishing this song kept us in good spirits.”

Those good spirits and the decidedly unique circumstances around them propelled 148 to create a body of work around the song; the result is their second EP release, Blue Moon.

“Blue Moon is an abbreviation of the famous saying, ‘once in a blue moon,’” Suertudo shares. “We wanted to build off of the astrology theme from our debut EP, Dark Matter, but also find a name that symbolized where we stood in our development.

After the release of Dark Matter, we felt like everyone we met wanted to paint us in a corner,” McQueen considers. “People would advise us to either stick with rap or afro beats, or on some occasions even, try and convince us our sound was not ‘it.’”

Check out “Double Trouble” below and find out more about 148 via our Five Questions With segment.

We go by the name 148 (Pronounced one-forty-eight). Our name came from our university residence at 148 Westwood avenue in Hamilton. This was where McQueen and I (Suertudo) met, became brothers, and found a deeper love for music. I remember we would come back home after nights out or stressful days and a casual freestyle battle or melody riffing session almost became a necessary conclusion to every evening. Through one another we discovered that we had a genuine talent not only in identifying good music but more importantly making good music. Eventually, we graduated, but the foundation of what we started in “148” Westwood avenue was the building block in our hobby becoming a dream and the fuel to the fire as we began working to make those dreams a reality. 148 is a brotherhood, 148 is love, 148 is all you are meant to be in this life, and more.

As far as individually, we’re both pretty normal guys who just love music and want to create good vibes for a living.

Our music literally has no genre, its just based on vibes. Unfortunately, due to stereotypes associated with the colour of our skin, most people we came across when we started making music loved to put us in a box and say, “they’re rappers”. Do we rap? Of course, we do! But our music is much more than just Hip Hop, with all due respect. Our music is the various experiences and genres of music that have been significant to us our entire lives. From growing up in Africa and listening to pioneers of afro-beats (i.e. DBanj & 2Face) to the popularity that MTV gained in Africa in our teen years, which introduced us to pop culture icons such as Ludacris, Akon, Lil Wayne & Justin Timberlake.

We take all these experiences/sounds and they become the catalyst for the final product every time we hear a new beat we fall in love with.

When it comes to our writing styles, it’s really very organic. We listen to a few beats, maybe pour a glass of wine, or have a cerveza nearby. Then we just vibe, create melodies, and sooner or later warm, bam, Bob’s your uncle we have a new banger on our hands.

McQueen and I actually write our verses separately, so we each bringing something unique to the song.

Asides from performing, I would say creating and writing new music is definitely the best part of it all.

Unfortunately, with the whole pandemic going on its definitely been harder to book shows. However, we are using this time to shoot more visuals for our music. So, the people who enjoy our songs can have more content that showcases a little more of our personalities, since they can’t see us live just yet.

I would say our live performances are quite intense! We definitely bring the energy a 100% of the time, because it’s that same energy that the audience feeds off on. I wish we could actually set up a heat map on the stage before we perform because it would honestly just be red all over.

Performing is really the best part of this whole gig, having that interaction with the people who listen to our music is the best feeling without a doubt.

This is a hard one because the way we make music we kinda have something for everyone. So, some days if you are in your feelings you could listen to ‘For you’ or if you just wanted to dance and move your body, I’d probably put on ‘Crazy’.

But if I had to pick one, I would go with ‘Double Trouble’. That was the song that really inspired this whole project and brought us out of the quarantine slump. It’s the perfect song if you had a late start to your summer and need to catch up on some good vibes.

The Canadian music scene as anyone will tell you, is absolutely booming. Obviously, you gotta acknowledge the OG’s like Drake and The Weeknd in there. Aside from that, they are some crazy talented artists in the game right now like 88Glam, Daniel Caesar & Jessie Reyez; that are making quality music and receiving the attention they deserve. Then obviously when you are talking kings of the underground scene, you gotta add Pressa and Yung Tory in there for sure. Obviously, we aren’t mentioning everyone but that just goes to show the abundance of talent we have in our country.

We actually have a song called “All Night” featuring Yung Tory coming out sooner rather than later. So hopefully we’ll get to work with some of the other people we mentioned as well.