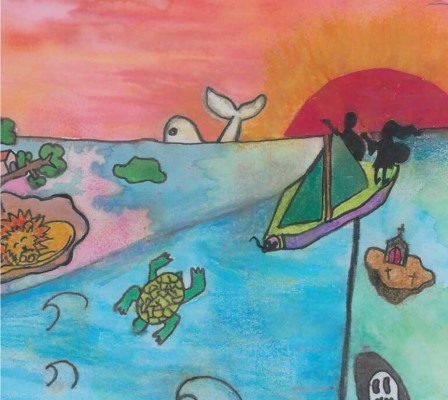 Indie-folk/ alt band, The Wind Whistles have released their fourth and final album, “Sail Away”, which is an epic farewell album. You can check out the album now, and if you like what you hear, tomorrow (September 4, 2020) for Bandcamp Friday, Bandcamp will be waiving fees.

Take a few moments to check out the album, and find out more about The Wind Whistles via our Five Questions With segment.

We are an indie-folk/alt band originally out of Vancouver. We might have shown up on your radar back in 2008/2009 when we were a full-time touring band spending most of our time on the road either in Europe or Canada and recording albums in between. Then three albums and several tours in we suddenly went silent. Behind the scenes, a series of unfortunate events unfolded…the loss of our home/studio, the end of a relationship, and a horrific tour accident where we nearly lost all of the members of our band. Much of this ended up making it into songs that would go on our upcoming Sail Away album. When the dust settled, even as a broken band, we decided to push ahead with our farewell album (Sail Away), which is about saying goodbye to loved ones and leaving to never return. It took the better part of a decade to complete.

We started out on our first album making rootsy country-tinged folk music, and over several albums, this has evolved into our own sound that blends in more of our alternative or indie rock influences. Using primarily acoustic guitar and bass, I think the best descriptors of our style would be endearing, or even cute, however recently we’ve gotten more ambitious with our writing. Common topics we tend to write about are self-discovery, connection to nature, relationships, and community. Our latest album Sail Away is our most unique and meaningful album to date, which is very much due to the events surrounding its creation.

Intimate. We’ve always made it a point to make personal connections at our shows. On stage, we would start conversations with the audience, tell stories, invite people to be part of the show, and even pass around a tour book for people to draw in and leave messages/recipes/travel tips, etc. Although our life on the road days are behind us, these days we do the odd streaming performance on Facebook or Instagram, and you might catch us at a folk festival when festivals become a thing again.

I’d pick Church. Although it’s not completely representative of the bulk of our material (Turtle might be the best for that), there is something special about it, and it also gets pretty epic and that excites me. It was written in an empty church when we were on tour in Germany, and it’s about how unimaginably massive the universe and time really are.

It’s hard to not get tempted to rep a ton of our friends here. Language Arts would be our top right now, not only because they’re excellent, but Kristen is about to drop a new album this year. Check out her song ‘Sprout’. For more adventurous listeners, Silver Pools are great. Sally Dige (Canadian but living abroad) just came out with ‘It’s you I’m thinking of’, which is a song I’ve had on repeat for a while. Our close buds Ok Vancouver Ok are churning out great albums every year, and their latest one is no different. If I can include artists that are no longer active, lately I’ve been listening to a lot to DD/MM/YYYY’s Black Square and These Hands’ The Golden Touch. Those albums might be some of my favourites of all time.