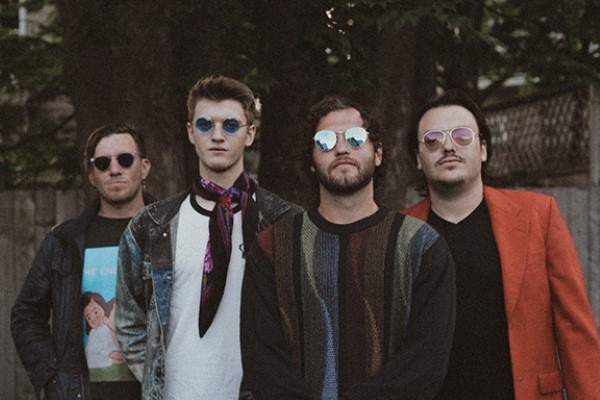 Prince Edward Island-based rock/blues band, Arsenal Mills is made up of Brad Milligan, Griffen Arsenault, Josh MacNeil, and André Uyterlinde. The four have released their groove-laden single, “Lovesick and Broke”.

“This song is a true story about a close friend of mine,” Milligan shares of the song’s origins. “He ended up losing someone special to him, which then caused a downward spiral of depression and drinking.

We approached this song with the idea of making it as relatable as possible — the most important aspect of any song in any genre — but ’Lovesick & Broke’ was written with the hopes it would be sort of therapeutic for him.”

“If you keep telling yourself you’ll be okay, you will… Right?” Arsenault adds.

“Lovesick and Broke” lands ahead of their debut EP release, set to be unveiled this Fall.

“‘Lovesick & Broke’ helped us find our sound as a collective,” Arsenault says. “It paved the way for the rest of the album.”

“It creates an interesting, contrasting image,” Uyterlinde offers. “It’s one of those songs that sounds very positive and energetic yet, at the same time, the lyrics are the opposite.

But the groove is infectious… Nothing beats a rock n’ roll tune that makes you want to dance.”

Check out the single below, and find out more about Arsenal Mills via our Five Questions With segment.

We’re a 4-piece band from Prince Edward Island, Canada. Brad Milligan (Lead Vocals/Guitar), Griffen Arsenault (Lead Guitar/Vocals), Andre Uyterlynde (Bass/Keys/Synth), Josh Macneil (Drums/Percussion).  We’re born and bred islanders, and proud of it. Collectively we started playing together in the summer of 2019, realizing early on that we all had very similar tastes in music, but more importantly, we had similar tastes in food!

We’ve found that we write our music in phases. A lot of the lyrical content and musical ideas are born out of the collaborative writing of Griffen and Brad. Many of the ideas that come from those meetings are fleshed out by the band together in our rehearsal space. Songs will come at all different stages in their initial formation, and we have such great chemistry together that they just kind of flow out. It’s a really interesting and fun way to write. Both privately and together as a group on the same song at times.

We’re doing our first official debut with this lineup at an interesting time in history, to say the least. We have to be really creative with how we do our live show. We’ll be at Shaw’s Hotel for a more acoustic incarnation of the live show, September 4th, and 5th. We’ve also got an upcoming show in November with local talent, and close buds; ‘The Royal North’. It’s taking place at ‘The Guild’ theatre in Charlottetown, PE, and it’s a show we’ve been itching to play.

We pride ourselves on our live show. We put on an electrifying, dynamic performance full of powerful highs and emotional lows. It’s important for us to give 100% at every show and to put on the kind of show that we would want to be at. No one wants to watch an artist just stand there and play their instrument, anyone can do that. A live show is about entertaining and doing the unexpected.

This was a tough question for us, but we decided to go with our upcoming single The Bleeding Heart. It’s due out later this year. We chose this one not just because we’re all just really excited to share it and see what people think, but also because it’s going to show a nice little contrast of our abilities. That we’re able to branch out and try different approaches stylistically. None of us want to be pigeonholed to one specific genre. A good song is a good song.

Right here on PEI alone, there’s tons of amazing talent. It’s honestly a musical powerhouse that not many people in Canada get the chance to see, let alone be a part of.

But we love tons of Canadian artists from ‘The band’ all the way to ‘Bryan Adams’. Sometimes you’re in the mood for ‘Neil Young’, other times ‘The Guess Who’. Canadian artists are wildly talented, yet harshly under-appreciated.