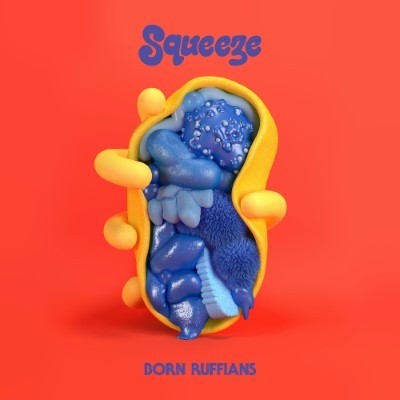 The Toronto-based band Born Ruffians announce the release of SQUEEZE — A new record the band is releasing on their own label Wavy Haze Records in Canada and Yep Roc Records (ROW). They also share the double A-Side, “30th Century War” and “Albatross”.

SQUEEZE comes hot on the tails as a companion album to their previous record, JUICE released six months ago. Although written well before the global pandemic lockdown, SQUEEZE‘s nine songs were birthed in the shadow of Brexit and Donald Trump and, as vocalist Lalonde puts it,

“thinking about the end of the American empire and these massive global shifts that we’re seeing” and wondering “How long does it take for a full-on revolt? When do the prisoners realize we outnumber the guards?” Lalonde will admit to being “one of the millions who’ve become more politically switched on” by present-day circumstances. Hence the lyrical bite to tunes such as the shimmering-but-stinging and decidedly fatalistic  “30th Century War” – which wonders aloud, with a nice nod to recent intra-band obsession Elvis Costello, how everyone can still be “all filled up with emotional conflict” when “peace and understanding is so, so basic” – and, Lalonde says, “sums up the way I see things better than I realized it did” with each passing day.”

Which isn’t to say the ever-nimble, ever-catchy Born Ruffians aren’t still a lot of fun. The Ruffians have definitely been having a lot of fun, hence the “big squeeze of creativity,” that had the band planning on releasing JUICE and SQUEEZE as part of a multi-album continuum well before COVID-19 hit.

Born Ruffians are set to release the full SQUEEZE on October 2nd, 2020 via their own label Wavy Haze Records in Canada.