Five Questions With The Record Breakers 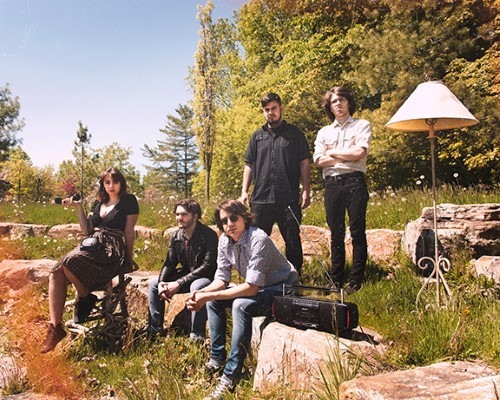 The Record Breakers were first formed in 2014 for a Beatles-related celebration, the band began to explore and develop their identity as a bilingual five-piece with a knack for solid musical arrangements, memorable hooks, and larger than life harmonies.

“We had a special encounter with Blue Rodeo,” they recall. “That inspired us to bring country into our pop sound.

So, we’re a country band, we just sing about cars instead of trucks, you could say!”

2016 saw the release of their self-titled debut EP, with a follow-up sophomore offering, Bigger Plans, landing in 2018. Notably thereafter, they opened for Bon Jovi that summer at the Montreal Bell Centre in 2018, something they bill as an “opportunity of a lifetime,” crowned “Discovery of the Year” at Festival New Country Brome in 2019, and handpicked for CBC Searchlight’s Top 50 Producer Picks in 2020.

Check out the video for “In My Car” below and find out more about the band via our Five Questions With segment.

We’re five friends from the West-Island of Montreal who’ve grown up together writing, rehearsing, and performing. We met while playing in different groups back in the early 2010s and it was ultimately our love for The Beatles that brought us together. We’re now a few weeks shy from our 6 year anniversary as a band and love what we do more than anything.

We’re a pop-country band. You could say we sing about cars instead of trucks! We write upbeat songs with catchy hooks, huge harmonies, and twangy musical arrangements. We’ve been described as Kacey Musgraves meets Brad Paisley, in the past. Having both Bella and Hayden as songwriters gives our sound and our concerts a diverse and engaging atmosphere. Both of them bring the songs to the band once they’re written (Bella usually writes what she sings, Hayden usually writes what he sings), and then we arrange the songs in our rehearsals. It’s been a great way of working!

We’ll be streaming our first post-lockdown show from The Wheel Club in Montreal on September 18th. It’ll be accessible for everyone to watch on our social media (@recordbreakersband). Our shows have always been about turning the songs we write at home into memorable experiences to share with our audiences. It’s usually a high energy show combined with the right amount of softer moments. We consider a show a success when we have our crowd singing with us, whether it’s a song they know or not.

Definitely In My Car. It’s got the perfect blend of country, pop, and rock that our sound has been moving towards over the years. In the band’s early days, our genre would change with every new song that was written. After our first time seeing and meeting Blue Rodeo together in 2015, we started taking the band in more of a country direction. It has worked pretty well for us so far.

As a band, Blue Rodeo and The Strumbellas will always have a special place in our hearts because of the inspiration they’ve had on us. Among our individual favorites are Rush, Shania Twain, Sum 41, Dean Brody, Sam Roberts, The Tragically Hip, Tim Hicks, and more. Our latest discoveries include Fionn from Vancouver and Tenille Townes from Alberta.