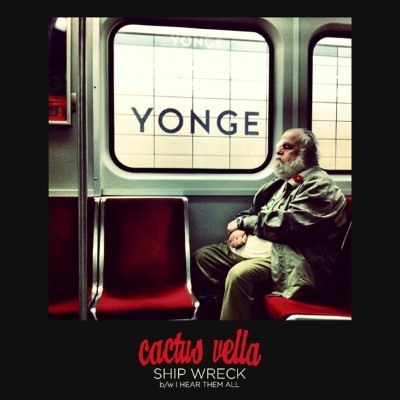 Toronto, ON-based punk artist, Cactus Vella has released a brand new single, “Ship Wreck” on August 28, 2020, via Little Rocket Records. We see him blending the energy, three-chord patterns and rebellion of punk, with the raw, simple beauty of folk with this release.

Check out the single below and find out more about Cactus Vella via our Five Questions With segment.

I’m Cactus Vella from Toronto. I’ve been performing and recording music since the early ’90s. I’ve played in a bunch of punk rock bands and had a blast touring and partying with some great people.  I’ve been more focused on performing acoustically for the last decade or so.

My music? 4 chords on an acoustic guitar played by a guy who grew up on punk. That’s the simple way to put it. My music is hard to describe. I never know which genre to select… When it comes to writing I tend to keep it simple. There’s no need for me to get too complicated as a solo performer. I’ve spent most of my life writing punk rock songs. This affects the way I write music still to this day. There’s no way around it for me.

I don’t have any shows coming up due to our current situation. I’ll probably do some online performances soon. My live set is me and my guitar. I try to make it as energetic as one could be for a solo performer. I try to share my energy with the crowd. I tend to keep my set times on the shorter side.

My newest release “Ship Wreck”. That’s the one. Lyrically I think it sums me up really nicely.  I’m happy with the performance and the production. Also, I have a couple of friends (Jesse LeBourdais and Boxcar Shawn) singing backup vocals for me on the track. Definitely check it out.

Fucked Up is always at the top of my list for Canadian bands. Others would be LeBarons, School Damage, and Dragged In.