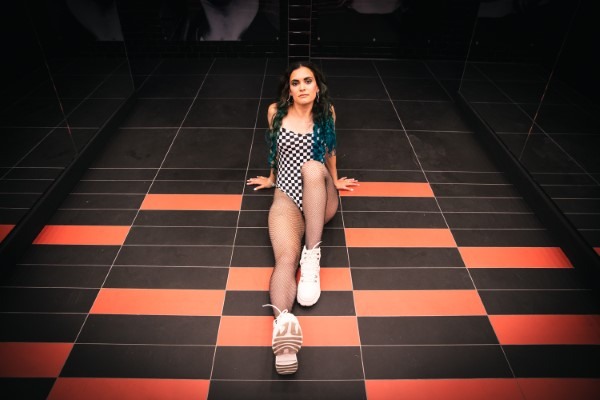 Toronto pop songstress Christee Palace’s new single “Falling For You“ is going to be your new favourite track.

Palace has been releasing singles since 2018’s “Harden My Heart” which surpassed 123,000 streams. With a growing fanbase and a rich musical background, Palace is quickly making a name for herself in the world of Canadian music. Her father, Pete Palazzolo, is a seasoned industry veteran and instilled a love of music into Palace from the early age of four.

Having shared the stage with artists like Sean Kingston and Walk Off The Earth, her stage presence continues to strengthen. In 2019 she took home the Jim Beam International Talent Search Award.

We caught up with Christee Palace to talk about her rising star, debuting new music, and where she’s going next.

What were some important lessons you learned from your father through his experience in the industry?

My dad has always told me the same few things as I was growing up, and especially once I told him I wanted to do this for the rest of my life: there will always be somebody better, there is always somebody working harder, the music industry is all about a little bit of luck, timing, talent, and connections, and to always look down the hill, not up. That last one is something I’ve had to really try hard to do while navigating through the industry, ESPECIALLY during a pandemic. To look down the hill, and not up, is to remember where you came from, and how far you have gotten from where you first started. It’s not always about looking ahead at what needs to be done, and what you have yet to accomplish because truthfully, the hill you have to climb is never-ending.

Did you know early on what kind of music you wanted to make and what your aesthetic would be as an artist?

I think I’ve always known. I grew up listening to classic rock because of my daddio, but I loved pop music so much. I think I gravitated to the “pop-rock” genre mainly through artists like Avril Lavigne, Amanda Marshall, Pink, Fefe Dobson, Kelly Clarkson, etc. I used to practice singing to these kinds of artists and loved how powerful and strong they all were. I’ve always had an edge, even as a child, and I think all of these artists really helped to shape who I am today. Pop with a little bad-ass rock.

How did you feel after you released your first EP? What was that experience like?

I don’t think there is ever going to be another experience quite like that. Releasing your first little “babies” if you will, is just indescribable. It’s like sharing your diary with the world. I love “firsts”—it’s so interesting looking back and seeing how things have evolved.

Tell us about writing your new single, “Falling For You” — what made it so special that you decided this would be your follow-up to “Danger”?

“Falling For You” is a song I wrote about the exact night my boyfriend and I first got together. It’s so hilarious because there I was at a time where I was singing about “hardening my heart” (that song had literally just been released), and then this guy completely changed my mind. I would usually never, EVER be the one to make the first move, but there was something about him (and perhaps the few drinks that I had) that decided he would be the exception.

I’m so excited that this is the follow up single to “Danger”—man, what contrasting songs they are! “Danger” was all about a relationship that was just not meant to be, that I knew would hurt me, and “Falling For You” is finally my happy ending.

Are you working on another EP to tie in the single?

That was initially the plan. I think depending on how things go over the next few months, I will be making a decision as to whether or not I want to release an EP or just singles. We will see.

Obviously, for performers, the landscape has changed so much this year — what do you miss the most about performing live?

It’s hard to even comment on this because it is truly so heartbreaking. Performing is like breathing for me. It’s the only time I feel pure bliss, and nothing else matters in the world. I love running around the stage, being in the moment, engaging with the audience… I just miss looking out at people and seeing their smiles while I sing my songs. It’s an irreplaceable treasure. I miss it so much.

What’s next for Christee Palace?

This girl is writing and recording new material already. J I am hoping that within the next few months live music will be back to normal (I can dream..) but until then, the music will continue. I will tell you this….. I have HUGE plans for the new year.