Fast Romantics release video for “Top of the Mountain” 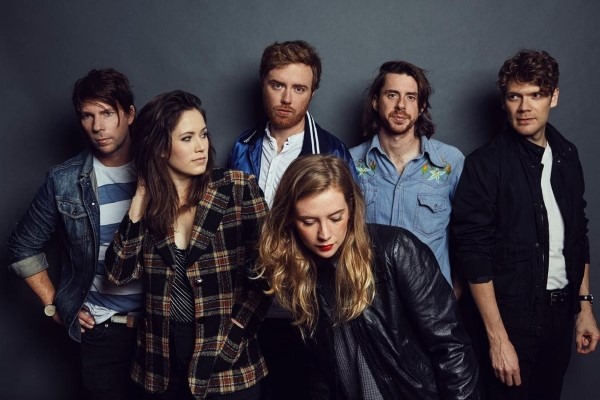 Fast Romantics, acclaimed indie-rock band have unveiled the video for their latest single “Top Of The Mountain.” The new video is a cinematic adventure featuring all six members of the band. “Top Of The Mountain” is the fifth track to be taken from the band’s latest album, Pick It Up which dropped on August 7 via Postwar Records.

Of the video, lead songwriter Matthew Angus shares “So much of this album is about my experiences trying to balance these two powerful forces inside of me that seem to be in opposition: ambition and self-doubt. How do these two creatures survive inside of me at once?”

Angus continues; “This one’s about that unstoppable engine in all of us that pushes us forward, to try to make things, to progress, to be better, only to turn around and die, and eventually be forgotten. There aren’t many answers in here, and like so many of the songs on this album, this is more of a feeling than a thought. But some part of the way this turned out makes me feel like all of this climbing is worth something. But it’s still a mystery to me as to what’s at the top.”

Self-produced with additional production and mixing by Montreal’s Marcus Paquin (Arcade Fire, The National, Timber Timbre), Pick It Up is a collection of clever, deeply honest songs that reflect the time in which they were written. Featuring the singles; “Hallelujah, What’s It To Ya?,” “Pick It Up,”  “Only People,” and “Made for You.” Pick It Up showcases lead vocalist Matthew Angus’ finely-honed artistic vision and songwriting craft. Packed with infectious melodies that are sure to get stuck in your head for days, and relatable, thought-provoking narratives, Pick It Up explores the dualities we face as humans and the complexity of our emotions. The title track was inspired by Angus’ lifelong battle with depression and anxiety and acted as a personal pep talk for the singer as he overcame months of crippling depression; “The Rules” addresses childhood bullying and the victimization of marginalized individuals and the triumphant “Hallelujah, What’s It To Ya?” sees Angus, although no longer religious, reflecting on his religious upbringing.

In celebration of their latest release, Fast Romantics hosted their first-ever worldwide album release party on Thursday, August 20. The visually stunning performance, which was broadcast live from the legendary Dakota Tavern in Toronto, was a special one-of-a-kind show that saw the band performing live together for the first time in 2020. Filmed and directed by respected Canadian film director Jared Raab (July Talk, Arkells, Born Ruffians), fans can still view this phenomenal performance until Sunday, August 30 here. Check out the new video for “Top Of The Mountain” here.

Pick It Up Track Listing
Pick It Up
Only People
Made for You
Hallelujah, What’s It To Ya?
The Rules
Top Of The Mountain
Iso Radio
Do No Wrong