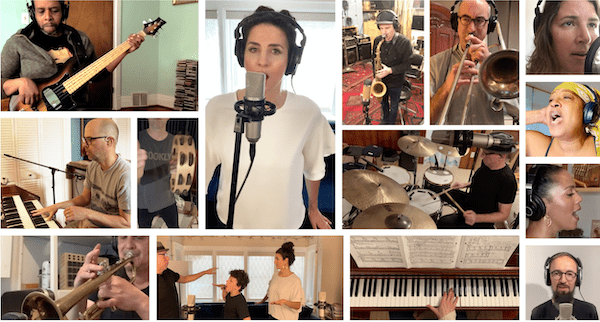 A few months ago, JUNO Award winner Laila Biali started the Quarantunes videos, a series of live, one-take videos captured individually by the musicians, and then compiled into the full performance. Each musician filmed and recorded themselves at home – no notes have been changed, enhanced or added.  The videos feature the musicians who performed on her new album, Out Of Dust, which was released earlier this year. Laila would be touring with these musicians right now, so these videos have been the next best thing – all of them gathered together on a virtual stage.

Last week, Laila released a new addition to the series with her timely song “Revival”, which you can watch below:

On the video and song, Laila says:

“Revival is a song about banding together to fight for change, for a better future. I initially wrote it in response to the 2016 US election and the uprisings we saw in support of women’s rights and the climate. Now, mid-pandemic and on the precipice of another critical election, the song takes on new meaning, especially with regards to civil rights. This is the second installment of my “Quarantunes” series, and while we find ourselves at various stages of reopening, it is still impossible to bring together this many musicians into one space to share this music, live. So, we have taken to the virtual stage once more, each of us capturing one through-take performance from our respective homes, mixed together by my husband and co-producer, Ben Wittman, with a video compilation by the Brooklyn-based Halla Creative. 17 instrumentalists and singers are featured here representing Toronto, New York City, Vancouver and Halifax. 9 of them performed on my original studio release of Revival, including GRAMMY winner Lisa Fischer, and 8 more joined the fold for this special version.”