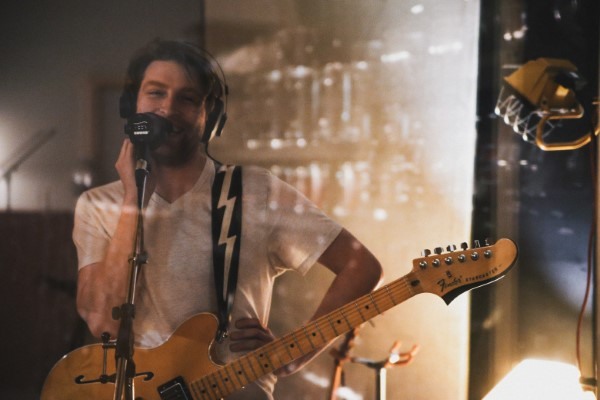 Winnipeg, MB-based indie-rock artist, Jared Adams recently released his debut album, Tragic Nostalgia, which explores the themes of growing old while trying to hold on to the things you knew when you were younger.

Now, he has unveiled a brand new music video for a live version of his track, “Tides”. The video was made entirely from his home during quarantine and shot on a 360-degree camera, featuring some interesting VFX that composite together five different versions of Jared playing the song.

Check the video out below, and find out more about Jared via our Five Questions With segment.

I’m Jared Adams, I’m an indie rocker from Winnipeg, MB, I’ve spent half my life playing in independent bands and finally decided to venture off on a solo project. I love writing music but being on stage and performing is where I feel most comfortable so I am grateful to be able to do that.

I always have a hard time classifying my music, recently I’ve been using the term alt-folk more often but that really only defines a bit of what I do, maybe the term ‘eclectic mess’ would be a better description. I do have some songs that are built up from an acoustic chord progression but there’s also some that are rockers; some that are poppier; some that are dark, brooding piano ballads; and some that have electronic drums, so it’s really hard to pin it down exactly.

Actually, I do! In Manitoba, we’ve been quite lucky to have a low number of COVID cases so some venues have been able to reopen with a limited capacity and seating only. My debut album, ’Tragic Nostalgia’ came out on June 26th but I’m holding an official album release party on August 29th at the Osborne Underground in Winnipeg. So for anyone in Winnipeg, come celebrate, and for anyone out of province, hopefully, things get better soon and I can make my way across this country again.

That’s a tough question, as I mentioned before, my music’s quite eclectic so it’s hard to pick one song that best represents it. I think though, ‘When We Were Young’ the penultimate track on the album, might be the best place to start. It has a little bit of everything, it starts as a piano ballad and builds into a rocker with a kinda spaced-out synth solo.

Currently, as I write this I’m listening to the new Fast Romantics album which is absolutely fantastic, so many interesting little melodies here and there. Also this year, We Are The City released what I think is their best album, the lyrics are so raw and full of emotion, tied to incredibly dynamic music. Both bands are amazing live and I was really looking forward to seeing them this year.