Home / Promos / Nicole Rayy has a lot happening this summer with the release of her new single “Broken Boys” and her All Female Drive-in Music Festival, HarmoniaFest

Nicole Rayy has a lot happening this summer with the release of her new single “Broken Boys” and her All Female Drive-in Music Festival, HarmoniaFest 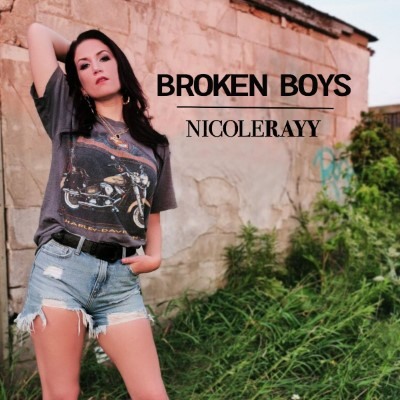 The pop-country music powerhouse singer-songwriter and female empowerment force known as Nicole Rayy has a lot going on in the next month (she’s had a lot happening all summer actually). She is one of those artists that makes things happen by creating many and vast opportunities for herself and has done just that for many years. Lately, she is the dynamic strength behind the movement of empowering other female artists around her to rise all along with her.

Rayy is one of the few artists that has been very busy during the era of Covid-19. She created her Facebook Music Live sessions named All Woman Wednesday and invited many female artists throughout the country to join her for these shows. She has participated in the Neighbourhood Lawn concert series, Stories, Songs & Social Distancing at Moonshine Café ­– Patio hosted by Dave Woods, a Car Park Sing-A-Long with Linda Heldman and drive-in country music festivals amongst many other events. One of her favourites is her many different give-away contests with amazing prizes that she has been doing all summer long.

Rayy is now back on centre stage with the upcoming release of her latest anthem “Broken Boys” and hosting the first annual HarmoniaFest ­– an all-female drive-in music festival.

“Broken Boys” … it’s hard not to be excited about music when it includes a tune like “Broken Boys.” It’s digitally released everywhere on August 21 and will be at Canadian country music radio on September 18. This tune is classic Nicole Rayy. Her style connects with the heart and this song tugs at your heartstrings, gives you chills by her delivery, and makes you sing along with her. It showcases the talent that Rayy possesses.

“I’m so excited to share “Broken Boys” because I think it is a song so many of us can relate to. We have all fallen for that person that we think we can change. I’ve always been drawn to helping people and being able to fix things. But in a way this song reminds me that we are all a little broken and there is nothing wrong with helping someone carry their baggage, but never at the expense of yourself.”

HarmoniaFest … building on Rayy’s #GirlTalk Sessions events this summer, (you saw her sharing the stage with fellow female artists for performances and collaborations), she will be hosting, and performing at, the first annual HarmoniaFest  ­– an all-female drive-in music festival that will take place in Milton, Ontario, on August 29. It’s a night of female empowerment and live music featuring a killer lineup of phenomenal female artists including Bree Taylor, Alessia Cohle and Leah Daniels as well as acoustic performances by Suzie Kory and Mackenzie Leigh Meyer. This festival, with a full band, lights and video screens (you remember those festivals) and in partnership with the Italian Cultural Centre, was created in hopes of elevating female voices in the often male-dominated genre, but also ­in support of an amazing cause ­– Halton’s Women’s Place.

Rayy has this to say about HarmoniaFest,

“I was inspired to create HarmoniaFest back in November when the festival lineups for 2020 were being announced. I was so frustrated that lineup after lineup was full of male performers and headliners and there were barely any female names on the posters. There are so many talented women in this industry who work so hard and I just wanted to create another opportunity to showcase them. I’ve always believed that you can’t wait around for an opportunity, you have to create it yourself!” 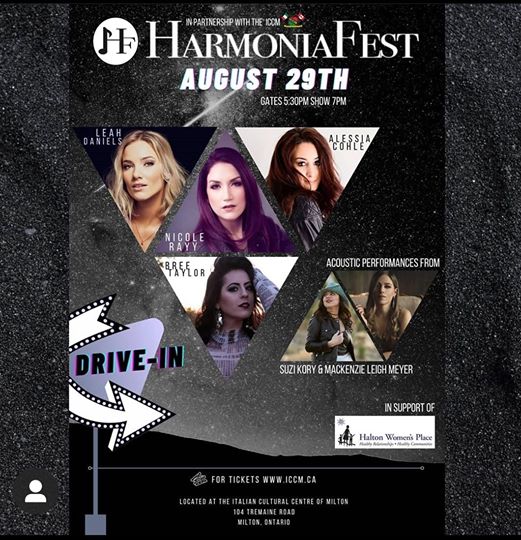 To reserve a spot for your vehicle at this drive-in country festival, click here.

Nicole Rayy, who calls southern Ontario home, is the real deal, is a force to be reckoned with and is bringing a healthy dose of feminism into the country music world.