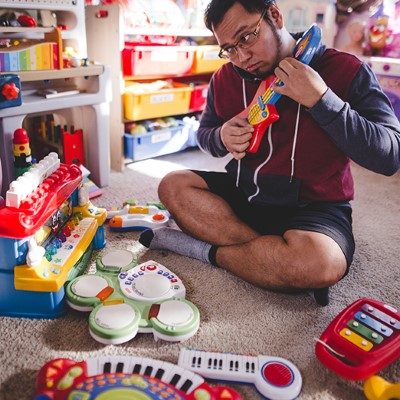 The song is all about examining life and relationships, even if it means risking loss or regret.

It’s a series of notions Feliz knows personally and all too well.

“Switching gears in life is a tough choice to make,” he confides. “Arriving in Montreal from Manila as a student in December of 2013, the struggle to feel secure and find a place to call home became a recurring theme for me throughout the years.

As I focused on my art as a contemporary music composer, other opportunities came to expand the boundaries of my world,” he continues. “Eventually gaining Canadian permanent status after more than six years, the decision to switch directions and develop a singer/songwriter career felt like a fresh start in living life.

Then, I was invited to do a four-week artist residency at the Kimmel Harding Nelson Center for the Arts,” Feliz says of the plane ride to Nebraska and ultimate inspiration for “Airplane Wings.” “Writing the lyrics first, fleeting thoughts took off from staring at blue skies amidst examining personal feelings of being distant, unwanted, and left out.

Riding an airplane captured an added feeling of placelessness in the making of the song, which was both liberating and overwhelming.”

Check out “Airplane Wings” below and find out more about Grumpy Kitty Boy via our Five Questions With segment.

Hi, everyone! I am Juro Kim Feliz, a contemporary classical composer, and singer-songwriter based in Toronto. My musical journey started in the Philippines where I was born, and I moved to Canada in the final days of 2013. As a composer, I had performances of my musical works in festivals and concerts across Asia, North America, and Europe. I also won a competition in Kuala Lumpur during 2010, got invited for artist residencies in Wyoming, Nebraska, and Toronto, and received a nomination for the Golden Balangay Awards in 2019 that honours outstanding Filipino-Canadians in their expertise. I also used to produce and co-host the now-defunct radio talk show Sigaw ng Bayan at Montreal’s CKUT 90.3 FM (2014-2017) where we broadcast weekly episodes on Filipino migrant and diasporic life.

Any takers on a first-name basis? You can definitely call me “Juro” (JOO-row), but the moniker “Grumpy Kitty Boy” (or “GKBoy” for short) rather suits my latest artistic ventures.

My artistic alter-ego has his own story too—unlike any other fictional singing cat, Grumpy Kitty Boy hates dry kibbles in his meals and roams the streets of Manila and Toronto in his dreams! Preferring the company of characters like Raccoon, Pet Monkey, and Bad Puppy Mummy, he writes poetry at his saddest and composes songs at his grumpiest. All of the magic starts in his cozy “Unwanted” box, serving both as his humble abode and a symbol of longing for adoption and emphatic belonging.

My songs provide a glimpse of Grumpy Kitty Boy’s fictional world, and yet they all share the same battlecry: “Be authentic! Embrace the grumpy!” I feel that positivity has turned into something that society consumes without question, and many folks glorify positive thinking at the expense of suppressing our capacity to be realistically present and explore deep feelings. It’s high time we consider our thought lives as complex, instead of reducing them as either “positive” or “negative.” Or even simply “good” or “bad,” for that matter. It is in this spirit that the majority of my songs are autobiographical, where lyric writing always becomes the channel to examine where I am at in life.

Loving Owl City’s synth-pop sound since the 2009 release of “Fireflies” (from Ocean Eyes), I now lean towards a musical style that mainly emulates video game vibes and pop wave aesthetics to the likes of The Midnight. I am very much inspired with the surreal, dreamy, and yet sober songwriting that I find not only with Owl City, but also artists like Sufjan Stevens, Radiohead, and Porcupine Tree.

Discovering prog rock in my formative years, I now also try to negotiate between composing pop-sounding songs and trying to break free from its constraints. I grew up in Manila with OPM on the radio waves (Original Pilipino Music—an umbrella term for Filipino popular music), and its somewhat homogenous mainstream sound fuels the itch to burst the bubble and aim for a diversified sound.

I started out in my teens as a classical pianist and a keyboardist in church rock bands. Whatever my synth-pop affinities are, my singer-songwriter inclinations will always gravitate back into the piano as my instrument. In lieu of performing with a band as I grew accustomed to, I currently sing my songs solo with a simple keyboard and laptop at hand. I think this caters more to my composer instincts of taking full control of the wheel (although collaboration is always a desirable thing).

Instead of playing gigs, I rely on broadcasting live streams at Grumpy Kitty Boy’s Facebook page! I’m celebrating his “birthday” this month (first year anniversary since I launched the project), and I’m putting up a music live stream on Friday, August 28th at 9 PM EDT to commemorate this milestone. Another one is also scheduled for the fall during late October (TBA). Live shows will have to come later once the global pandemic crisis subsides significantly.

This is a difficult question to answer! All Grumpy Kitty Boy songs at the present are like pieces of a jigsaw puzzle—together, they all painstakingly paint a bigger picture of “grumpy” life.

However, I’d say that “Blue Eyes” (soon to be released on a future debut EP) serves this purpose with so much clarity. Here is a song that portrays Grumpy Kitty Boy who apparently suffers from amnesia (“Dreaming that I’ll recover…but who am I? I’ll never know”)—but the choruses immediately imply instead that this is someone who avoids reality, someone who pretends not to see what’s staring in front of them (“With blue eyes that lure me to my destiny // I pretend that I don’t see”). Losing one’s sense of self, someone experiences a denial phase—upfront and center.

If it makes sense to you, I would hold a greeting placard for you—“welcome to the world of grumpy living!”

On one hand, I love the work of Tanya Tagaq and Jeremy Dutcher! They dig into their indigenous roots and cultivate new, fresh takes on traditions not only to make music but also to establish the complexities and discomforts of what is “Canadian.” I also admire similar stances on knowing one’s roots with the kulintang gong fusion group Pantayo, hip-hop artist Han Han (whose tracks I used to spin during my radio days), and blues singer Carolyn Fe. I like that the “Canadian identity” here is being challenged many times as much as it is being celebrated for what it is.

On the other hand, I dug into Drake’s album Nothing Was The Same (2013) for a rather long series of music classes that I taught this year. Let’s just say that a new-found admiration for Drake was quite unexpected after I tried peeling out some musical layers I would recognize in each track!