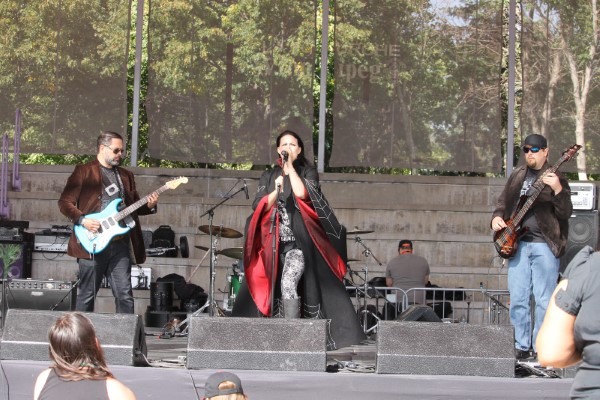 Fronted by vocalist Violet Vopni, of Metis and Icelandic descent, Helfreya rounds out with guitarist Keith Meyer, bassist Russ Maskus, and drummer Travis Stephenson. The Winnipeg-based band draws on Norse and Celtic mythology in their songwriting, and the name is derived from two Norse Goddesses: Hel, the Goddess of death, and Freya, the Goddess of love.

“We’re the duality between light and dark,” the band says, “and the enigmatic amalgamation of love and death.

We take fans on a strange adventure.

This is an album that has been over 20 years in the making,” Vopni shares. “Keith, Russ and Travis had spent decades crafting their instrumental sound in their former punk rock band, Wormhole.”

Check out “Shieldmaiden” below and find out more about Helfreya via our Five Questions With segment.

Care to introduce yourself to our readers?
We are Helfreya from Winnipeg, Canada, an amalgamation of love and death in the form of progressive rock and alternative metal.

I’m Violet and I joined the band in 2019. It’s the first band I’ve been in since high school when I was in choir, chamber choir and vocal jazz. Being in a rock/metal band is a wildly different experience but after years of salivating over stages and experiencing intense FOMO (fear of missing out) I had to take my shot and join some amazing people.

The things I can tell you about my bandmates are:

Keith plays guitar, is an accountant but also not an accountant but works in finance and is involved in secret organizations. He’s been very concerned his colleagues would find out he’s in a metal band and wouldn’t take him seriously anymore. He doesn’t really have a secret identity on stage, he still looks like an accountant. He didn’t know he was in a metal band until I told him we were. I got him to wear a leather jacket once which was a major step up from the brown suit jacket. He likes wine, Fiji water, and hates money.

Russ plays bass, is quiet and weird but also funny and clever. He’s also an accountant not accountant some kind of finance thing. He’s always keying into what I’m singing and following my melody lines. He has the tallest bass amp I’ve ever seen. I’m glad it has wheels. He’s always willing to crack a cheesy Dad joke at practice but he’s not a Dad. He likes really spicy food and growing his own peppers and camping.

Travis plays drums and smokes weed. He’s worked for the City of Winnipeg and prevents flooding among other things. He seems to intuitively know whether or not the rivers will flood. He has arthritis in his feet which makes drumming tough! He recently lost weight and now brings the best sugarfree coolers to jam. I’m always stealing them. He can also play bass and guitar, and has been teaching his kids. He met Keith when they were in middle school and the two of them have been in various garage bands since 1994. He likes wearing hats, fishing, and taking photos of the fishes he’s caught. One day we’re going to release a track including Travis’s commentary on the biggest fish he ever caught.

I sing and write the lyrics. I’m a psychic therapist, astrologer, and life coach but I’m the kind that has 2 PhDs and takes a scientific approach to my work. I’ve been in polyamorous relationships and I’m bisexual but I’m currently with the love of my life Stephen Chubaty which happens to be the lead singer of thrash metal band Dark Messiah. I’m in another band named The Keen & The Kind that does jazzy folk-pop. The guys in Helfreya cringe when I sing anything from that project because it’s so happy. They haven’t noticed yet that I’ve been sneaking jazz melodies into our metal music. Shh! Don’t tell them! I like ducks, coffee, and neuroscience.

As a band, we’re this eclectic mix of creativity and weirdness. We like being able to take fans on a strange adventure with us.

Keith lives for progressive rock. The guys grew up on Pink Floyd, Tool, Nirvana, and Soundgarden.  So our instrumental sound was built from that foundation. Keith spent 20 years perfecting his unique guitar tones and styles, which are sometimes reminiscent of Flight of the Bumble Bee. He’s obsessed with not sounding like anyone else out there and therefore crafting something truly original.

For years before I joined the band, the guys would get together every Wednesday, say nothing to each other, pick up their instruments and play for 2 hours, recording every moment of it. They’d listen back, pull out anything that sounded amazing and craft it into a lyrics ready instrumental.

When I joined, I gained access to hundreds of instrumentals and jam sessions that basically became Lego pieces. After a lot of listening, I began writing lyrics and finding melodies that suited the music. Celtic and Norse themes were prevalent but I also explored sexual assault, protesting, and environmentalism in her lyrics. I wrote State of Emergency in 2019 to address the climate crisis but in 2020, many provinces in Canada announced an actual State of Emergency including her home province Manitoba. On the heels of that, the song Rebellion, also written in 2019 was about the protests happening throughout Canada and the US. I like to think these are pure coincidence but maybe being psychic in the band I was intuitively picking up on something?

None planned right now. We just released our first album as Helfreya and hosted a release show at The Park Theatre in Winnipeg. We followed all the current social distancing recommendations.

It was weird to have tables and for people to be sitting during a metal show but we saw a few headbangers in the audience doing what they could.

Keith is the master of solos and he can go on forever. Travis is always making funny faces. Russ likes to randomly shout out things and that adds to the audience participation portion of the show.

Because I’m is doing vocal gymnastics on stage, I take a break midway through, much like Myles Kennedy when he’s on tour with Slash, and the guys in Helfreya jam for awhile, usually playing something they’ve never played before and therefore it’s something fans have never heard before. It was a really fun and special moment at the album release and we plan to keep it as a staple of why you should see us live.

Billy Talent, Finger Eleven, Three Days Grace, Theory of a Deadman, Syryn, Dark Messiah, Dizzy Mystics, Ronnie Ladobruk and the Electric, Eternal Now, Black Optic, Hell Hounds, Our Lady Peace, The Tragically Hip, this list could go on and on, Canada has a lot of great talent, especially in the local scenes.