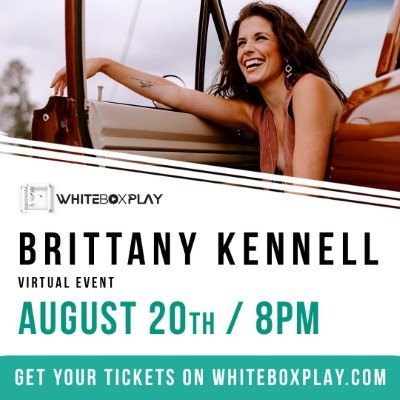 Brittany Kennell is following the release of her latest single “You Don’t Get Me Stoned” with a live virtual concert filmed from Chambly, QC. Kennell will be performing alongside Mario Telaro (cajon) and John Anthony Gagnon-Robinette (guitar-dobro-steel). The 60-minute concert will be available through the new performing platform, WhiteBox Play.

The virtual event is scheduled for August 20th, at 08:00 PM (EST). You will be able to hear Kennell’s singles “You Don’t Get Me Stoned” and “Eat Drink Remarry,” as well as some of her other stellar original tunes such as; “Neither Did I,” “Wallow,” and “Drawn To Ya.” Kennell will also be performing songs that are special to her, and include a tribute to some of the awesome Women of Country.