Five Questions With The Kings 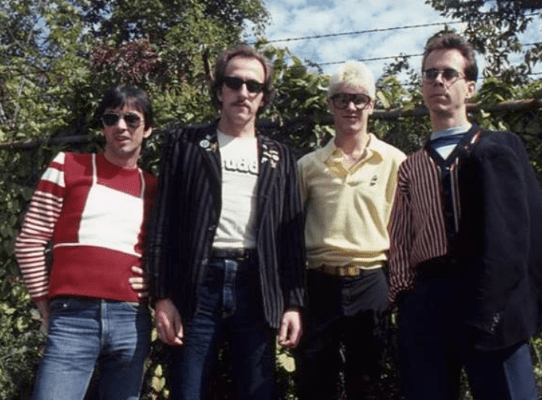 Canadian rock band, The Kings have been around for decades and August 2020 marks not one, not two, but three crown-worthy milestones for the long-iconic band. First being, 40 years ago this month, they released their Bob Ezrin produced debut album, The Kings Are Here on US major label Elektra Records. Next, their smash hit single “This Beat Goes On / Switchin’ to Glide” first entered the Billboard Hot 100. And finally, on August 23, 1980, The Kings closed the now-legendary Heatwave Festival, holding court alongside fellow rock royalty Talking Heads, Elvis Costello, The Pretenders, Nick Lowe and Rockpile, Teenage Head, the B-52’s, and more

We’re here to talk about the third one, their midnight appearance at the now-storied Toronto-area festival – produced by John Brower–that’s inspired the exclusive release of The Kings: Live at Heatwave, a 30-minute concert movie available in a premiere at 8 pm on August 23rd.

“The Kings and Teenage Head were the only bands that gave permission to be filmed,” recalls founding member Dave Diamond. “As Teenage Head’s audio has disappeared, this is the only surviving, authentic, and original sync footage from that day.”

“We’d worked hard and were ready for a gig like this,” says drummer Max Styles.

The Heatwave Festival at Mosport Park turned heads from the onset between its high profile roster, ultimate crowd size, and that it sat at a cultural turning point in the evolution of new wave music. (It was also marred with some scandal, but… Aren’t they all?)

“For some reason, they didn’t film our whole 55 minute set,” Diamond muses. “But there’s almost half an hour here, and we’re very proud of it.”

Check out the performance below, and find out more about The Kings via our Five Questions With segment.

The Kings were very lucky when we started out because we had another strong songwriter and singer in Sonny Keyes and a very musical drummer in Max Styles, the other founding members.  Zero and Sonny started writing songs in Vancouver and realized soon after that they would like to form a band and Zero knew Dave and Max from back in his hometown of Oakville, Ontario.  At this time Dave and Max had both been playing full time in bands around Ontario and Michigan for years, so they were far more experienced.  Luckily they were both between gigs at that point so they decided to try their luck in the studio with some songs by Sonny and Zero and some written by Dave.  We realized that something special was happening right away and we decided to keep at it and went back and forth from Ontario to BC until we decided to settle in Ontario where the scene was more active.  As time went on we were all working hard on songs, mostly in the prog-rock genre, which suited us because we were all brimming with ideas.  After a time we decided to work on shorter more commercial songs and that led to us going in the studio to begin a self-produced album and that is where we met world-famous producer Bob Ezrin who liked our stuff but thought it needed his expert touch and with his help we got a US major label deal.

Due to COVID we have no upcoming shows but we have a new live movie coming out August 23rd, 2020 on our YouTube channel called “The Kings- Live at Heatwave” which was filmed at the legendary “Heatwave Festival” from Mosport Racetrack.

We are best known for our international smash-hit “This Beat Goes On/Switchin’ to Glide”, and a lot of people know and love it.

We are lucky to have such incredible talent from Canada, from Celine to Shania to Lightfoot to the Guess Who to RUSH to Neil and Joni, we love them all!