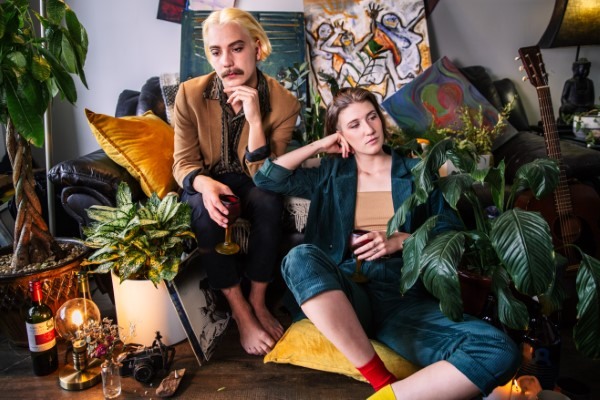 Calgary, AB-based duo, Dear Friend is made up of Annie da Silva and Bobby Henderson. They have unveiled their single, “Willing And Able” ahead of their EP, Dying Days, which is set for release on August 28, 2020. The album was written entirely in the studio, they intentionally went in no material so that they could capture songs at their absolute rawest iteration. The six-song release was recorded over six days, with the artists setting out to write and record a brand new song each day.

You can pre-order the Dying Days cassette HERE.

Check out the single, “Willing And Able” below and find out more about Dear Friend via our Five Questions With segment.

“When Calgary songwriters Annie da Silva and Bobby Henderson made a 3 am pact to form a group and record an album, they were unknowingly establishing the core tenets of Dear Friend. The band would exist around capturing the rawest emotions in the most spontaneous of moments, which encapsulates their debut EP “Dying Days”. The album effortlessly moves between alt-folk to 70’s-esq pop and rhythm and blues, all anchored by da Silva and Henderson’s rich vocal performances.

The six-song album was written and recorded in a span of six days, with absolutely no material prepared prior to entering the studio. Each morning, Annie and Bobby would write a song for the day which they would then flesh out throughout the course of the day, inviting friends to contribute parts totally off the cuff. In the late hours of the night, the exhausted duo would listen back to the day’s work. They would hear the true form of the song for the first time, something that was slowly developed from morning coffee to final playback. The result is an album that dives into spontaneous emotions and captures the joy and excitement of when songs first take flight.

Dear Friend draws inspiration from solo era Paul McCartney, Stevie Wonder as well as Canadian acts such as Feist and Julie Doiron. “Dying Days” releases digitally on August 28th with a cassette coming out in late September, both via Factotum CO.” – JP Lancaster of Factotum CO.

Tell us a bit about your writing process.

So far, the writing process has been entirely in the moment. Each song on the album was conceived, fleshed out, and recorded on the same day. Nothing was pre-planned, the moment just kind of dictates the direction of the songs.

Dear Friend is a brand new project that came together during quarantine so we have not had the chance of putting together any live performances but are gearing up for an exciting post-covid touring season.

“We are both really stoked on our first single “Willing and Able”. This song has a lot of layers to it in terms of instrumentation and hooks you in with our catchy chorus making it perfect for late nights with the pals.” Bobby & Annie

“There are so many!! To narrow it down, we’d have to say Feist, The Guess Who, Mac Demarco, Alanis Morissette, 36?, Wyatt C. Louis, Daniel Caesar and Freak Motif” – Bobby & Annie