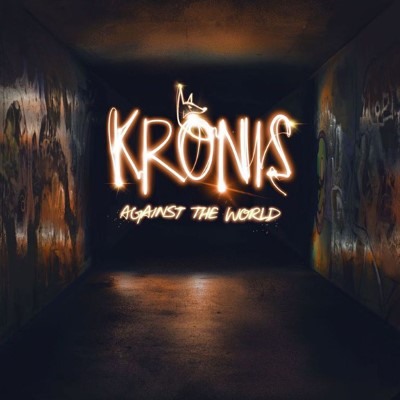 Canadian outfit, KRONIS has released his newest single, “It’s Time For Love”, and his breakthrough album, Against The World.

“I spent three years in the studio with Parker creating Against The World,” Toronto and Los Angeles, California-based frontman Aaron Kronis says, name checking mix engineer and producer Parker Ament of XLNTStudios. “We didn’t know what the title would be, or the number of tracks, but we knew we were onto something.”

That ‘something’ is alt-rock streamed live with live guitars, live vocals, and Ableton. It’s guitars into cell phones while on hoverboards. It’s the essence of skateboarding at Burning Man channeled into a technologically enabled sonic sojourn spanning the ages.

“KRONIS has become the final evolution of a lead singer and an extraordinary guitar player who’s into electronic sounds and manipulations of waveforms to create something new that sounds familiar,” Kronis says. “And Against The World wholly captures the constant stamina required to endure this music industry based on my life in Los Angeles, and the world today.”

There’s a lot of moving pieces to the project, including contributions from musicians Matt Starr (Mr. Big, Ace Frehley), Chris Moore (RockOfAges Tour, Project Nfidelikah), and Andy Sansei (Missing Persons, Frankie Valli). There are live performances at the links of the Viper Room, and features on KLOS Los Angeles and 102.1 The Edge with Alan Cross’ Ongoing History of New Music.

And there’s a lot more to come, Kronis adds.

Check out “It’s Time For Love” below and find out more about KRONIS via our Five Questions With segment.

My name’s Aaron, (ay ay ron, not ERIC!) and my last name is my artist name, KRONIS. I’m from Canada and have spent the past 13 years in California skateboarding, recording music and living on the best coast for a bit. I’m a guitarist with a love for the 90s and EDM. I hope you enjoy listening to this album as much as I enjoyed recording it!

I have ongoing songs that are finally getting finished the way I feel they need to be without any compromise. Growing up, I listened to the Beatles first, but then right into heavy metal. We’re talking Old Metallica and Pantera. Bands like White Zombie and Corrosion of Conformity. I also was way into Pink Floyd and was able to see them a lot. Combining this with growing up skateboarding in the 90s and then again at Burning Man where all the EDM meets everything else… this is what you get. KRONIS, Against The World.

Guitars with drums that are REAL, or electronic. I don’t care if it’s digitally created as long as I like the sound. We do NOT compromise on anything. I told Parker Ament, my producer from XLNTSound in Los Angeles, to make sure that he makes some of the parts as hellbent as possible with no holding back.

So much fun. I very much enjoyed telling pro session Drummer, Matt Starr to ‘Do whatever the hell you have always wanted to try in the studio on someone else’s dime for the next two takes because we already got what we needed’.

He played on Believe, Change and ‘I’m Not Sorry’, the first single from ‘Against the World’

Out of the gate, we Explode with hopefully some really big SCREENS WITH VISUALS, all the electronic backtracks needed including drums in Ableton along with crushing Guitars from KRONIS and the lead vocals. Some tracks have guest vocalists that can appear in the live shows, for now, they are on the backing tracks. We worked with EXPERTS on setting this up. Our tech AJ has worked with the best. He’s a regular for Electronic Creatives when Covid-19 isn’t happening.

You’ll see me riding on a Hoverboard while playing Vibin’ Me (Uphill Battle Part 2), a track which incorporates double bass programmed EDM drums along with Chris Moore’s actual double bass playing and very fast 16th and 32nd note chugs, get this, on DIFFERENT NOTES. Yeah. Different notes is the fun part here… you’ll have to see what I mean before I give the Peace sign, before the final chorus when I play it live.

We can say – On Sept 1st, we’re doing a show to officially launch the new StaminaRecords Twitch Channel. – I’ll be featuring my live performances of a track a few times a week, sometimes a new performance of something we’ve added to the live show repertoire, or not… live GAMING including some really cool retro stuff, that will all be posted in a calendar on twitch so it doesn’t bore the main user base… but allows for eclectic gaming at night among old friends online.

Right Now, the album came out and I’m telling everyone that ‘It’s Time For Love’ – With Everything Going On right now in the world, it really is. This song is fun and demonstrates the true genre fusion I’m going for with Alternative Metal Guitar Music Crossed with EDM.

My favorite Canadian bands and artists are strangely all still currently on the radio…we’re all still hearing bands like I Mother Earth, the Tea Party, Our Lady Peace, Moist, Matt Good, on the radio, not much new. When it comes to The Tragically Hip, all Canadians have slowly grown with them. As a Canadian, until you can’t help but love it, I have some remix ideas for live including a song called ‘When the leafs win the cup’ that references ‘robotic snow plows getting stuck’ and other ‘futuristic’ things.

What is NICE, now that I have full control using Ableton Live and a killer tech like AJ Ramirez(Electronic Creatives), so when I play live, I have the ability to do things how I feel like, not based on the ‘other band members repertoires’.

I play along with Ableton Live, so when I finally can tour this record in Canada, I’ll add Canadian cover songs that ‘I wouldn’t play in the States’ as it wouldn’t resonate with them.