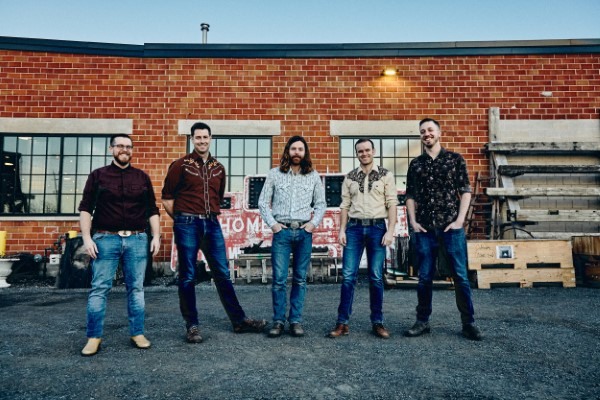 Toronto, ON-based bluegrass/ folk group The Barrel Boys have unveiled their new single, “Mainline To The Heart”. Being released to the public tomorrow, we have a special first-listen here at Canadian Beats. This is the second single from their upcoming album, Mainline, which is set for release on September 18, 2020.

“Mainline To The Heart” is a heartbreaking track that veers into Americana/ alt-country territory while still maintaining their tight sound built around rich vocal harmonies and virtuosic instrumentation.

“I wrote this song about some of the small communities we visited on a tour of Northwestern Ontario,” says bassist Tim O’Reilly. “Oftentimes a single mine or mill would be the main economic driver for the entire town, and in cases where those industries had shut down or scaled back, the people would be left completely stranded. There was one town in particular where a gold mine had shut down, and while there was talk about bringing it back, it wouldn’t have even helped anyone. In order to turn a profit, the whole operation would have to be automated, and in order to build the mine, they’d have to dig up the only road into town.”

Check out “Mainline To The Heart” below, and find out more about The Barrel Boys via our Five Questions With segment.

Care to introduce yourself to our readers?
Hi! My name is Tim O’Reilly, I’m the bass player in The Barrel Boys. The other members are Kyle Kirkpatrick (Dobro), Rob McLaren (Banjo), Nathan Smith (Fiddle), and Ben Wright (Guitar). We met at music school in Toronto, and when we first started playing together in 2012, it was a ton of covers, traditional tunes, and bar gigs. After a couple months, we all started bringing our own songs to the group, and before long we had enough to make a record.
Tell us a bit about your music and writing style.
Our instrumentation is bluegrass, but we get into old-time, classic country, Americana, and we’ve certainly played our share of Beatles tunes. You might say that we’re the bluegrass band at a folk festival, but the folk band at a bluegrass festival.
It’s a little bit tricky to nail down our sound because all five members write songs and sing lead. We each have our own influences, tendencies, and voice, so the band can take on a pretty different character from one song to the next. With this record, whether intentional or not, much of the writing revolves around some of the common themes of bluegrass and old-time music – i.e. trains, mining, roaming, drinking – there’s even a good old murder ballad. The stories are all distinctly Canadian though, and the writing is generally pretty modern. You can hear a lot of traditional influence in our sound, but we do a few things that might upset purists. Our latest single ‘Mainline To The Heart’ is a good example of that – it’s probably closer to a pop tune than bluegrass, strictly speaking.
Do you have any upcoming shows? For someone who has yet to see you live, how would you explain your live performance?
Things have been a little bit strange this summer, as I’m sure you can imagine. We had a really great tour schedule lined up, but it got completely wiped by the pandemic, so we’ve been just trying to get music out into the world however we can. We’ve done a couple of live-streams out of a beautiful venue in Hamilton called “The Cotton Factory.” We were able to broadcast in high-fidelity audio and multi-angle video, and you can still watch them at www.facebook.com/thebarrelboys/live, even if you don’t have a Facebook profile. We have a few other live-off-the-floor videos in the pipeline that we’ll be releasing over the next few months, and we’ve also been putting out some fun virtual collaboration videos on instagram (@barrelboysmusic) that have a fun sort of ‘Brady Bunch’ vibe. We do have one outdoor show lined up near Peterborough at the end of August, but singing for a live audience indoors is still restricted, and there’s no real indication at this point when that might change. Until it does, we’ll do our best to keep the content coming however we can!
If you were asked to suggest only one of your songs for someone to hear, which would it be?
That’s a tough one to answer – as I said before, there’s a ton of variety to our sound, and all the tunes have something different to offer. I’m pretty partial to this tune though,  ‘Mainline to the Heart.’ The story means a lot to me, and while I wrote it about mining towns, it feels a little like it’s taken on a whole different meaning since then. There are a lot of people who are stranded right now, living in places that they chose for jobs that no longer exist.
Canadian Beats is all about Canadian music, so who are your current favourite Canadian bands/ artists?
I saw Joel Plaskett a few years ago at the Montreal Folk Festival, and he blew my mind. I’m also a big fan of The Young Novelists, Lydia Persaud, Danielle Knibbe, Peter Graham, and AHI, to name a few. There’s a ton of great young Canadian talent out there right now, and it’s a damn shame that we can’t be out seeing them play live.
Connect with The Barrel Boys:
Website
Facebook
Twitter
Instagram