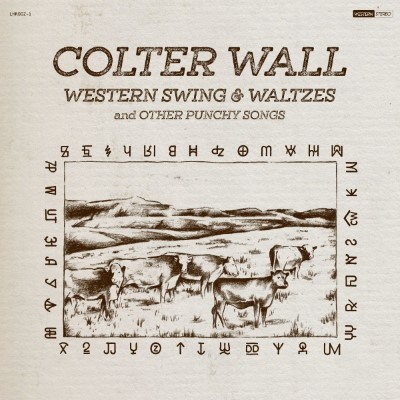 Hailing from Saskatchewan, 24-year-old Colter Wall has brought back some of the “authentic affinity for the North American West” through the release of his upcoming album, Western Swing & Waltzes and Other Punchy Songs via La Honda Records/Thirty Tigers on August 28.

Wall took on an additional persona during the making of this album by “rounding up his band, hot off a North American tour, to lay down these ten new songs at Yellow Dog Studios, deep in the heart of Texas. From his previous recording sessions with Dave Cobb at the helm, Wall began to take in what it meant to produce a record; the decision making, risk-taking, and band-leading all learned along the way. With Western Swing & Waltzes, it was Wall’s turn to take the reins. His band. His choices. And the finished product is diverse and effortlessly cool, with an extra log or two on the fire“.

According to Wall, his approach for this album “is that of a preservationist, pure as the prairie wind.” This is evident throughout an album that boasts being a “10-track ode to themes and labours of western life [while picking up] where his last album left off, with a reverence for his ‘working cowboy kin’ and a whole mess of cowboy songs.” Wall describes the album as including “songs [that] are punchier than I am.”

As a sneak peek of the album, Wall has already released two singles, “Western Swing & Waltzes” and “Cowpoke“. The release of “Cowpoke” as a single is an extra special addition for fans that have long adored his live version  Wall takes the Stan Jones classic cowboy tune and puts his own twist on the track. The addition of a harmonica, “a fitting addition to the classic timbre of Wall’s iconic voice, leads the song into a hopeful territory, while notes of pedal steel guitar and mandolin provide a sentimental grace. Listed by the Western Writers of America as one of the best Western songs of all time, ‘Cowpoke’ is a fitting tune for Wall, and the release of his version will ensure that the classic song will stick around.” In addition to these two singles, Wall “just released a surprise live performance video as part of a new series he calls ‘The Bunkhouse Sessions’. The first track released in this series, ‘I Ride an Old Paint/Leavin’ Cheyenne’, is described as a tease of his upcoming album. The video itself was “shot in a bunkhouse on the ranch of Wall’s friend and actor, Beau Smith. The video features the songwriter seated by a bedroll and coffee maker just in front of Ray McGuffin and Tom Ryan paintings which hang on the plywood interior wall of the bunkhouse. Wall listed this video as ‘Episode 1’ on his social media accounts.”

The album ultimately showcases a split in tracks that are written by Wall and tracks that are written by “Wall’s direct influences and fellow purveyors of honest, hard-earned tunes for the prairie and beyond.” These tracks include ‘Talkin’ Prairie Boy’, which was written by Wall and features just him and his guitar. It also includes songs like ‘High & Mighty’, described as “cowboy poet and rancher Lewis Martin Pederson III’s ode to a legendarily tough bronco [that] showcase Wall’s well-curated and hard-working touring band.” The touring band includes Patrick Lyons (pedal steel, dobro, mandolin), Jake Groves (harmonica), Jason Simpson (bass), and Aaron Goodrich (drums). They are also joined by Emily Gimble on piano and Doug Moreland on fiddle.

It has been said that Wall, “whose dusty baritone voice and deep well of stories are almost single-handedly carrying traditional western music into the future.” For those fans of western music, this is definitely the album for you!