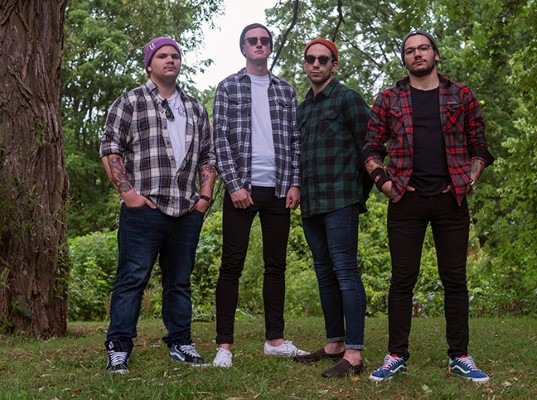 The band, which is made up of Josh, Joseph, and Jack Gaudette, and Shawn MacDonald, shares on the single,

“This is actually one of our older tunes,” Josh says. “It was a brainchild of an old band member that was sparked by a joke. The lyrics and ideas he brought to us were hilarious, but we couldn’t find a way to work them into a song. Then, one day we were doing some writing and decided to throw them over some cheesy chords and it was like electricity.

Words started coming out like wildfire and we were laughing our butts off writing these lyrics about high school stereotypes and joking about clichés.”

When we were at Beach Road Studios recording this tune, we had a wild time,” Jack says. “Josh lost his voice, there was seemingly a world-ending snow and ice storm outside and, on the final day, we woke up to an emergency alert about a nuclear plant in the area!

When it came time to record the video, we were all blown away by the mix,” Joseph adds. “Given everything that went on during the recording process, we NEEDED the video to be just as incredible.”

We came up with this idea to have a ‘Plaid Messiah’ going around, converting potential followers to the ‘way of the plaid,’” Shawn — who also worked his creative magic on the video — shares. “We rounded up our crew, which consisted of close friends and family, and created this rad video that pokes fun at some stereotypes in style and fashion, as well as a controversial event here in our small town.”

Check out “Beanies and Plaid Jackets” below and find out more about Moore Ave Underground via our Five Questions With segment.

Hi, I’m Josh Gaudette. Moore Ave Underground is made up of myself on guitar and vocals, my brothers Joseph and Jack Gaudette. Joe plays lead guitar and Jack plays Bass. And finally my best friend Shawn MacDonald on the drums. We are from a small farming community in Ontario called Aylmer where country is definitely the more accepted genre. Despite that little difference, Moore Ave is all about giving back to our community using our talents as musicians.

We always find our music tough to describe as we don’t really like to pigeon-hole ourselves to a genre. We have many different influences and we like for those to shine through. Usually, we say pop-punk or skate punk but the word punk tends to throw some people off. We have a very inclusive fan base with a large age range and I think that is important because it shows that our music can pull you in no matter who you are or what your musical tastes may be. We host house shows in our jam space with bands of all different genres and our band motto is ELE. Everyone Love Everyone.

When songwriting Josh usually starts the process with just him and an acoustic. Sometimes the songs start really folky and we add a lot to them as a band and sometimes they already have legs as a Moore Ave tune. After the song format is mostly figured out we jam it as a band and add the extra stuff that makes it Moore Ave. Shawn is really good at just drumming along and following the changes right away and then Jack and Joe will usually ask for a demo so they can sit with the tune and write out different ideas to try at practice.

Moving forward we are trying different styles of writing to try and bring everyone in the band into the initial process more. I would really like to tap the minds of my brothers, I think we could get some killer tunes out of them.

Unfortunately, we do not have any upcoming shows due to the pandemic. Our area is technically in stage 3 and we could be booking some acoustic shows or sticking ourselves behind plexiglass but that really isn’t Moore Ave.

If you haven’t seen us play live then you are missing out for sure. Moore Ave is one of; if not the most; energetic band in Ontario. We don’t have the ability to stay still during a show. Joe can usually be found somewhere in the crowd doing his Joe thing. Jack likes to run all over the stage and jump around like a mad man. We have some fun choreography that we attempt (keyword attempt) and even though I am stuck to a microphone I definitely still find ways to go nuts. We’ve broken mic stands, guitars, and even ourselves at times but we always have a great time and leave the stage satisfied, sweaty and out of breath.

If we could only suggest one of our tunes to someone it would be our newest single “Beanies And Plaid Jackets.”

We think all of our tunes are great but Beanies is something special. It truly is our best tune yet. We have grown so much since we started writing tunes and recording and this is the product of all of that learning. If you could hear Beanies when we first started playing it and compare it to the tune we just released you wouldn’t say they were the same tune.

Beanies And Plaid Jackets is just a fun tune that we know will get stuck in your head and make you want to hear more.

We listen to and love a lot of music so these questions always seem like the biggest and hardest to answer. Please enjoy this list of our favourite Canadian bands.