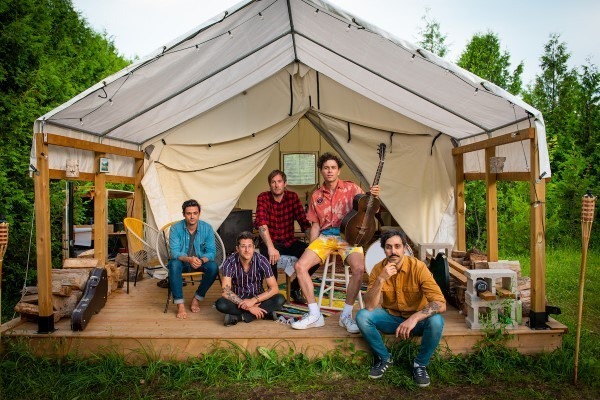 Arkells are back with the release of their brand new single “Quitting You” via Universal Music Canada. This track was inspired by Arkells upcoming Campfire Chords project set to be released on August 20.

“Following the release of their #1 Alternative radio track ‘Years In The Making’, ‘Quitting You’ is an intimate song about finding comfort in the people closest to you.” Accompanying the release of this single is a video that was self-shot by the band frontman Max Kerman in one take on an iPhone 11 Pro. Arkells performed the track for the first time on August 2 during “the Budweiser #OneTeam Tribute throughout Sportsnet’s Prime time coverage of the Maple Leafs vs Blue Jack game. The Budweiser #OneTeam Tribute is a celebration and a thank you to our nation’s frontline heroes whose tireless efforts these past few months led the charge to welcome back hockey.” This performance marked the first time Arkells have played together in over four months.

With the uncertainty that 2020 has brought the world so far, Arkells decided to pause working on their upcoming studio album and “went back to their roots, reinterpreting past material and rediscovering the singer-songwriter spirit that has long informed their trademark sing-a-longs.” From this, Campfire Chords was created. Campfire Chords is described as “a stripped back collection of Arkells’ most beloved songs and marks the band’s first full-length presentation of this side of their music.” According to the band, “‘Does it pass the campfire test?’ is a question [they] often ask themselves while working on new music. If a song can be stripped to its core and be sung around the campfire, ‘then we know we’re on our way.’”

In a time when things are still completely unpredictable, Arkells have stepped up their game and created a masterpiece that includes “songs about the essentials in life – love, friendship, community and optimism.” Although this will never replace the magic that is an Arkells live show, “Campfire Chords will feel like an old friend, here to keep you company.” Make sure to mark your calendars. This is one release you definitely will not want to miss!