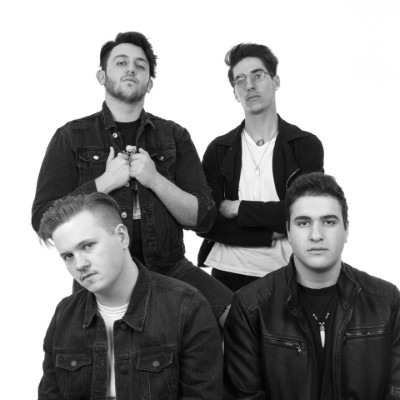 Toronto, ON-based alternative punk band Napoleon has teamed up with us at Canadian Beats to unveil their brand new single, “Little Sister”, which is a cover of the popular Queens of the Stone Age song. They will be doing a Single Release Livestream on August 8, you can find more information on this HERE.

The band has been working endlessly to keep their momentum during the COVID-19 pandemic, doing their part to give back to the community and keep the music industry alive. They have hosted multiple charity live-streams that have garnished a lot of positive feedback from fans. Profits from their solo streams and stranded fest live streams, including donations and profits from merch sales have gone to benefit Black Lives Matter Toronto.

You can check out the band at their first headline show in Toronto since the quarantine on August 20. It is known as A Scotially Distant Concert. Get more info HERE.

Check out “Little Sister” below, and find out more about the band via our Five Questions With segment.

My name is Jon Elmaleh and I sing and play guitar in a band called Napoleon from Toronto, ON!

I find it kind of tough to categorize our musical style…we sit between a few different genres I find. At heart, we are a rock band, but we also have a lot of punk tendencies, sometimes some more post-hardcore tendencies, we try to make our songs distinct so we aren’t writing the same song twice. I’ve always looked up to bands that are able to change their sound from album to album and evolve, in doing so, always keeping their sound fresh, that’s what I’ve always admired about bands like Radiohead, Bring Me The Horizon, or even Queens of the Stone Age. It’s funny actually, I remember when we were recording the new single, which is a Queens of the Stone Age cover back in May, I had a conversation with Scott, who produced the song and he was saying how he didn’t realize that I was such a big fan of Queens of the Stone Age, which I found so funny because back when Napoleon was starting out, people would compare us to Queens of the Stone Age all the time! We even used to cover their song “Feel Good Hit of the Summer” in our set consistently. But that also makes me happy because it means that we are evolving as a band, and we are writing songs that are unique to themselves, and that is really important to me.

Well, we had a huge summer of shows planned for 2020, but unfortunately COVID had different plans for us, we’ve done a series of livestreams, including one of fan selected covers on August 8 to celebrate the release of “Little Sister,” and we are also stoked to be doing a socially distant concert in Toronto on August 20! Our normal shows are typically loud, sweaty and energetic. We always try to get the crowd involved and get them moving to create a special experience for them, even if they have never seen us or heard our music before. We are not quite sure how we’re going to manage to do that at our socially distant show, but we’re gonna make the best of it!

As much as I love how our version of “Little Sister” came out, I gotta say that I would recommend our previous single “Amends” as a starting point for the band. That single was very important to us for a few reasons. It was our first pro-recorded song that we ever released. It was the first song we recorded with Scott, which led to us striking a great professional relationship with him, he is now managing the band as well as produces us regularly, and not to mention, it has Luke Bentham from The Dirty Nil featured on it, which is absolutely insane because they are one of my favorite bands right now, and he just is such an incredibly talented musician. It was truly an honor to have him sing on our song.

I don’t even know where to begin! There are SO many Canadian bands that I love, so many from around Toronto/the GTA as well which I always find cool, just knowing that they come from the same place as us! Obviously we’re huge PUP fans, on 2 occasions we’ve actually done full sets of PUP covers for special shows! Some of my favorite Canadian bands are Billy Talent, Alexisonfire, Silverstein, The Dirty Nil, The Flatliners, Counterparts, Attack in Black, Single Mothers (and The Drew Thomson Foundation too!), Life in Vacuum, Heart Attack Kids, Scott’s band Cancer Bats, Bearings, Selfish Things, Death From Above, and honestly, the list goes on forever. I consider myself to be very lucky to have grown up and discovered music in Toronto cause there is absolutely no shortage of great bands coming out of this city and the surrounding areas.