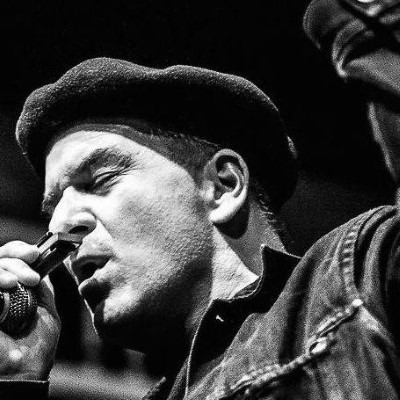 “This record is somewhat of a love letter to Italy and our friends there,” Reddick muses. “If I had one wish come true today, I would be sitting on a patio on the narrow, cobbled streets of Italy’s Sestri Levante…. I’d be kept cool by a sea breeze, and be drinking a glass of red wine.

I would be celebrating in the fine company of my Italian and Canadian musician friends, and savouring the endless beauty of that place and that moment. We would talk about the shows we have played together, and we’d remember and drink ‘to’ one evening in particular: the one in a wooden beamed theatre among those piacevole foothills of Piemonte…

The one where we performed as one, come fratelli, as brothers, Alive in Italia.”

Alive in Italia serves as a reflective retrospective of Reddick’s long-storied, boundary-breaking songwriting across 10 previous albums, and features songs from his last five — including the JUNO Award-winning Ride The One.

Beyond Reddick and his inimitable vocals and harmonica, the live band on the record includes musicians Steve Marriner and Tony D of MonkeyJunk — who Reddick has collaborated with as a writer on both of their JUNO Award-winning albums.

The Canadian crew was joined by Gab D on bass and Andrea Costanzo on drums — plus Fabio Marzaroli on guitar for “The Other Man” — known across the country as “The Gamblers”,  all of whom live in Italy.

“We travelled to them,” Reddick quips of the choice location in northern Italy’s stunning Piemonte region.

I was on tour in Europe with MonkeyJunk about two years ago, and we decided to extend our visits,” he continues, starting from the beginning of the album’s creation. “A beautiful friendship was born.

We put together the band that you hear on Alive in Italia and, one year later — November 10th, 2019 — we were back together again to record at Museo Tornielli in Ameno, Novara, Italy.

This recording is a document of friendship, music, and the endless beauty of Italy. And when it all came together, it inspired this emotional and celebratory concert.”

Give the album a listen through, and find out more about Paul via our Five Questions With segment below.

My name is Paul Reddick, I am a singer, harmonica player and songwriter who is influenced by blues and roots music. I won a JUNO Award in 2017 for an album I made called Ride The One.

I refer to blues as a beautiful landscape. I do not write songs which are traditional or emulate what has come before. I like to turn the dial a little bit and write songs that are evocative of blues. I am also very focussed on the lyrics. Many of my songs are structured and influenced by poetry and poetic devices and forms.

I have not played any shows since March, but as a matter fact, I have two coming up as part of the stage III opening. I’m playing at the Wheatsheaf Tavern in Toronto August 7 and at Peter’s Players in Gravenhurst August 8.

My live performances are made up of my own songs. I usually have a band of guitar, bass and drums with me. We don’t play too loud. I try to draw people into the performance by going deep into the songs in hopes that they may surrender to the music as I do.

There’s a song called Mourning Dove that I wrote a few years ago, I think it’s a good example of the type of songs I’m writing these days. It is included on my new live recording ‘Alive in Italia’.

I’m a big fan of Lee Harvey Osmond, I’ve written some songs with Tom Wilson who leads that band, and I played harmonica on their last record, Mohawk, which won a Juno Award this year. I also like