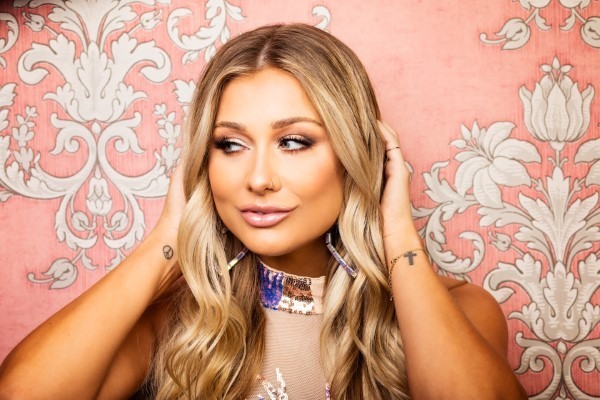 Madeline Merlo, not only is a CCMA Rising Star award winner, a BCCMA Female Artist of the Year award winner (both in 2015), she is also the winner of the Season Two premiere of the NBC hit show Songland, where her song “Champagne Night” was chosen to be recorded and digitally released by seven-time GRAMMY® Award-winning group Lady A as an official single. On top of that, she released three original singles on April 24 to Canadian country radio, including her personal favourite of the trio, “Kiss Kiss.”

“This song is about one broken-hearted person finding another broken- hearted person. It’s about pretending to be in love. It’s about how we get through it. This song is phase one of heartbreak. ‘We’ll say it’s more than just a weekend rebound, it’s a lie but it’s a good one right now.’”

On Monday, August 3, as a CMT exclusive, her video for “Kiss Kiss” came out. It’s released everywhere else on August 4. The vibe of this video shows the dangerous yet sexy side of post-ex rebounds. In this video, Merlo causes you to feel the feels that go with the classic get-over-him/her and helps you make real that its outcome is part of the healing process.

Share this:
Related ItemsBC MusicBCCMACanadianCCMAChampagne NightcountryKiss KissMadeline Merlo
← Previous Story The Mandevilles release new single, “You Feel Like Nothing”
Next Story → The Washboard Union’s music video for “Dock Rock” debuted on July 30. Are you in it?