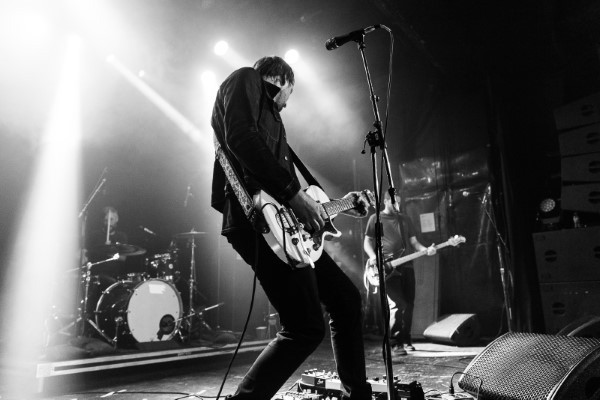 In 15 years and six releases, including three full-length albums, the Vancouver-bred, Toronto-based The Manvils have shared dozens of personal stories and inspired melodies with fans across the country. Their latest release, Reaction Arrow, may be their most vulnerable yet letting listeners in on love and loss while relishing the highest highs and surviving the lowest lows.

The last time we spoke (two & and half years ago?!), you were celebrating the release of your third solo album! Are there any ways you had to change your mindset when it came to coming back together with your bandmates?

The mindset is completely original to both styles. The Manvils albums present a more hard-hitting, sweaty run to the finish line with heavy lifting done mostly with old-school stacks behind us and everyone pitching in with their parts, preferred tone selection, and groove.

This is contrasted with the solo album (Noctuene Only/Broken Arms) writing and recording style, that are created from a singular ol’ acoustic and vocal melody (often tracked in one take) and then built up, track by track with the arrival of special guest players layering their parts to create the final product.

Both are extremely exciting ways to connect with the song, with bandmates and producers aiming to capture and support the most honest treatment of the track.

How would you say the energy within the band has changed as you’ve sort of “grown-up” together?

I have been driving this bus together with Jay who’s kept me focused over the past decade, and the arrival of both Jason Skiendziel and now Dave Fenton on bass guitar have been these added epic chapters of the band lore; each have made a huge impact to The Manvils and our evolving sound.

Sometimes chaos ensues, and when you recognize that a particular lifestyle drives a divide within the unit, you have to act. Collectively as a band, you are faced with a decision to move on, get vulnerable, and get back to writing and performing in a way that is more compelling than before. You always need to find the light. That’s the growth we’ve experienced.

The album was written & dedicated to the loss of several family members within the band with one review (Montreal Rocks) saying, “start to finish, it’s an emotional journey that not only allows us to feel, but allows us to experience the bittersweet journey of life.” Are you ever nervous sharing especially personal stories within your songwriting?

Yes, Reaction Arrow felt more a part of me than any other Manvils album. Definitely felt those showtime jitters when we went to release.

During the last year of preparation, we worked on slight mods within the mixes and final mastering tweaks that made a huge sonic impact to the final product (huge thanks to John Akred and Graemme Brown), and spending that extra time in post allowed that personal attachment to soften.

The irony is that the release has certainly felt more rewarding than the year spent tucking it away and tinkering, especially with all the heartfelt messages and press from music lovers that have reacted with such enthusiasm this past month.

Speaking on your video for “Sudden News”, what inspired the desert/abandoned old-western town setting?

Great question! The song inspired filmmakers, Brett Pedersen and Mike Goitanich to turn their short film into the Sudden News video and surprise us. Their gift came out of left field – these dudes are amazingly talented, and Brett invited me over to tweak the final cut together.

The video happened to also match the bold cover photo taken by my great friend and photographer, Devin Lund. It all came together and truly grateful for it…

What are the band’s plans in the next six months?

Baby on board for me, so isolation feels pretty on point on a personal level. But getting back to rehearsals has been really incredible – missed the lads, but the tinnitus also went away, so maybe the extended break was a plus on all levels other than safety protocol.

Keep writing would be the answer to that question, and hope a few special melodies and backbeats are unearthed to keep the creativity alive.