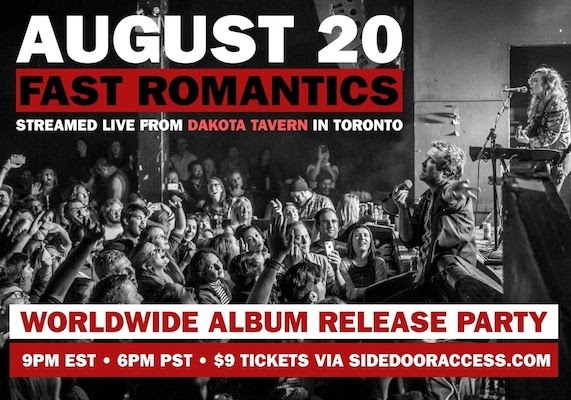 Acclaimed indie-rock band Fast Romantics will release their highly anticipated new album, ​”​Pick It Up​”​ on August 7, 2020 via Postwar Records. In celebration of their latest release, the band is thrilled to announce that on Thursday, August 20 at 9 pm ET/6 pm PT, the band will be hosting their first-ever worldwide album release party. Broadcast live from one of the band’s favourite venues in the world, the legendary Dakota Tavern in Toronto, this special, one-of-a-kind night will see the band performing live together for the first time in 2020 and will feature tracks from their latest record; including singles, “Hallelujah, What’s It To Ya?”, “Pick It Up” and “Only People”, as well as, fan favourites from their critically praised 2017 release American Love.

Filmed and directed by respected Canadian film director Jared Raab (July Talk, Arkells, Born Ruffians), the band will be revealing a few more surprises for this special evening over the coming weeks, so be sure to tune into their socials for additional announcements; including some news about special guests. A limited number of tickets are available and can now be purchased via Side Door.

Becoming increasingly frustrated with the standstill that the band had found themselves in, and in an effort to once again find their footing, the six-piece took a retreat to California. While there, news of the Covid-19 pandemic was brewing, but when the trip had to be cut short due to rumours of border closures, it was on the tense flight back home that Angus finally snapped out of his longstanding funk. “We had so many songs we were proud of. And we knew we had more than just one album. It was an embarrassment of riches. The world was telling us life was short. It was time to finish something.”

And so, as the world hit the brakes and went into lockdown, Fast Romantics put their foot on the gas. Quarantined away in their separate apartments, songs were divided into two distinct records over emails and video calls. The first record they would finish would become Pick It Up.

With additional production and mixing by Montreal’s Marcus Paquin (Arcade Fire, The National, Timber Timbre), Pick It Up is a collection of clever, deeply honest songs that reflect the time in which they were written. Showcasing Angus’ finely-honed songwriting abilities, the eight songs on the album explore the dualities we face as humans and the complexity of our emotions. “The Rules” addresses childhood bullying and the victimization of marginalized individuals, while “Hallelujah, What’s It To Ya?” sees Angus reflecting on his own religious upbringing.

“Due to the pandemic we can’t tour this record,” comments Angus. “We hope this collection of songs finds its way to your town by virtue of being passed along across the internet, as we all patiently wait in our houses for this uncertain force that we can’t control to burn out. While we wait, we’ll be building up the strength to “Pick It Up” when the time is right.”