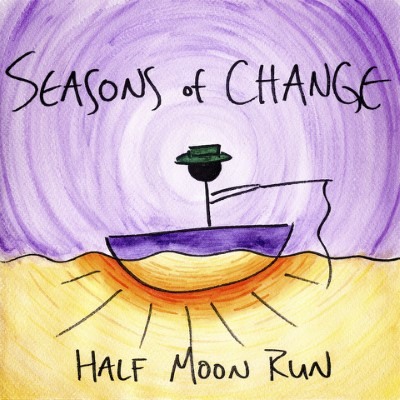 Seasons of Change is fantastic. It just is. Even I were to go out of my way in an attempt to nitpick, I don’t think I could come up with a negative thing to say about this latest release by Montreal’s Half Moon Run.

Before the music of the EP even begins, the sound of birdsong grounds the listener for a drift through corridors of tranquil resonance. Every part is well-performed and placed for maximum serenity: the soothing bass and reverberating vocals of “Monster,” the beautifully sung harmonies and repeated piano lines of “Look Me in the Eyes (Skitstövel),” the snare rolls along with acoustic and steel guitar vibes of “All at Once,” or the mandolin/harmonica features in “Grow Into Love,” a lyrical interpretation of which could potentially be slanted to apply to coming to terms with the relative stagnation to which we all have lately found ourselves accustomed (i.e., the lyrics “I have to get out of this place, but instead I’m at peace with staying”). In the context of the song’s overall theme of love and growth, that last observation is surely me reading unintended meaning, but it and the other tracks do instill a feeling of pleasant quietude regardless.

Should you require an aid in becoming relaxed, inspired, hopeful, and/or reassured, do check out Half Moon Run’s Seasons of Change. (Did I mention how fantastic it is?)