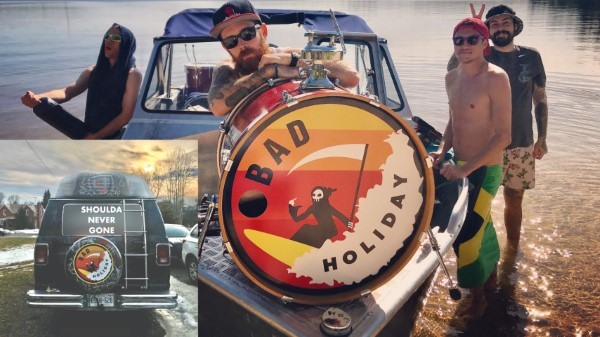 The punk party-rockers are back from Toronto Ontario. What happens when you combine four lifelong best friends, 90’s party rock and a couple of too many beers… a Bad Holiday! Fresh off of their induction to the Weekly Beat Bown Hall of Fame with their previous single “Can’t Control”. They’re already back with more, here to Premier their fourth single “Shoulda Never Gone”, off of their upcoming album which you can expect to hear more about in the future.

The video which was beautifully shot and edited by Jordan Westcott, brings back some classic 90’s VHS vibes and a “let’s kick back and have some fun” performance video. “Shoulda Never Gone” began as a vocal melody that just wouldn’t go away. Lead singer Edward Kennington had the chorus hook in his head for years before he finally found a chord progression that made the whole thing click. “Once that was done, it was only a matter of letting the other guys do what they do best”.

Drummer Ryan Schurman laid a deep groove that locks the whole song to perfection, bassist Curtis Crook managed to find a pocket for the bass that’s smooth as butter, and last but not least, lead guitarist Jonathan Keith tore up some filthy riffs to make it all click. The perfect mixture to create an incredible and a catchy tune.

I asked the guys what the inspirations for the single were and they had this to say.

“Lyrically, it’s a work of fiction, an imaginary couple struggling to stay together with the narrator well aware that things are heading South. Driven apart, he splits, only to get berated later for leaving in the first place. Sigh, young love”.