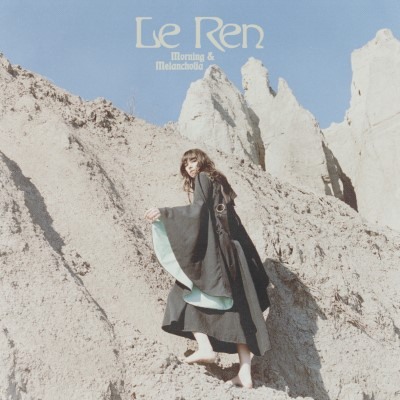 Morning & Melancholia is the newest EP from Canadian artist, Le Ren. Le Ren is usually Montreal based, but given our current unusual global circumstances, for the last few months, she has been on Bowen Island, BC where she was raised.

Morning & Melancholia is an apt name for this EP which has a light and airy tone while containing truly heartbreaking subject matter for its lyrics. The EP title containing the homonym for mourning is also fitting as this EP was inspired by the artist’s tragic loss of their partner two years ago in a car accident. As Le Ren’s press notes: “Since [the accident], [Le Ren] has been struggling with the weight of being the sole keeper of their shared memories and in response, translated a sliver of that experience into music.” In short, Le Ren has taken a personal tragedy, and used it to form a new beginning, a ‘mourning morning.’ The EP primarily features Le Ren’s steady, deep voice with a minimalist accompaniment of acoustic guitar and a secondary female singer. This focus on so few instruments reduces the barrier between listener and lyrics to truly let the songwriting of Morning & Melancholia take centre stage. As mentioned before, the topic of the songs are all tragedy, but there’s more than a little humor in Morning & Melancholia as well. As Le Ren’s press notes, “you can almost hear the slight smile on one side of her mouth as [Le Ren] sings, the knowing smile of someone who knows real pain, knows there’s surely more to come, but who also knows it doesn’t erase life’s humorous, enduring beauty.” In short Morning & Melancholia is a collection of sad songs sung with a laughing smile.

The standout track on the EP is “Love Can’t Be the Only Reason to Stay”. This track has the swaying rhythm and airy tone of a lullaby; this is fitting as this track seems to be a call to put a bad relationship to rest. As Le Ren sings softly, as if to a child, “I didn’t see you were steppin’ on me while still in the warmth of your arms.” The juxtaposition of lines such as these to the softness of the song gives it the aforementioned sense of cheeky humor. Moreover, if taken in the context of the stated inspiration for this album (i.e. the death of her partner), this song takes on an even darker tone as it carries implications for that relationship’s status before its tragic end. That kind of brutal honesty in such a simple melody is simply breathtaking.