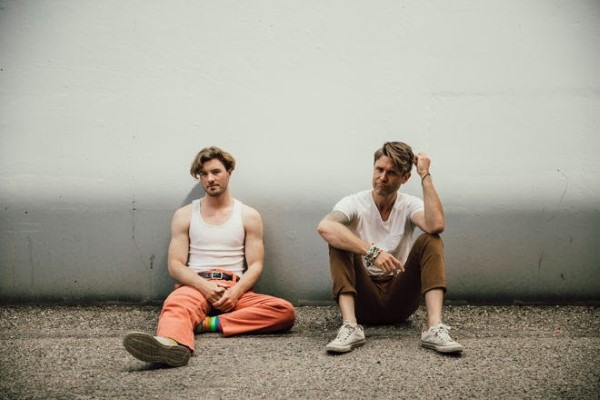 It’s only just the beginning for Vancouver pop-duo Via Barcelonia, they just released their latest single “​It Ain’t Over”​.

The duo is composed of Andrew Allen — a Gold-selling songwriter with credits on Multi-Platinum and Grammy-nominated albums — and triple-threat Taylor McKnight; a seasoned percussionist, vocalist, and producer. Back in 2018, they released their debut single “Just Wanna Dance” and their first EP — One — dropped a year later. Their diverse storytelling, combined with their electric pop energies, has earned Via Barcelonia a well-deserved place in the landscape of modern music.

The critical acclaim from One led to a FACTOR grant which allowed the duo to begin work on their new EP, slated for a Fall 2020 release. So we caught up with Allen and McKnight to find out more about their history, the making of ​”It Ain’t Over”​, and what we can expect from their 2020 EP.

Take us back to the birth of Via Barcelonia — how did you two end up making music together?

After touring together under the ‘Andrew Allen’ brand, we started exploring new sounds and ideas for a creative new venture that we could both collab on while on tour, which manifested into the world pop sound that is Via Barcelonia.

When you talked about or began to make music, were you on the same page when it came to the kinds of songs you would write and the musicality of it all?

Both of us are super passionate about music, and the creation of it, which is why you’ll definitely hear an evolution from the first EP to the forthcoming album. In some ways, we wanted to buck the idea of being on the same page, and instead just wanted to contribute what felt right and see where it took us

Since the release of your first single “Just Wanna Dance” back in 2018, what have you learned about yourselves as artists that you’ve carried with you as you went into making the rest of the music we’ve heard so far?

We’ve definitely recognized the importance of our lyrical content as so many people have identified our music as something that resonates within them. Just Wanna Dance was a super fun, upbeat song about literally dancing, whereas a lot of our new material tends to have more serious overtones with substantial weight in the lyric, while still positioned inside an energetic and uplifting pop record.

Tell us about the making of the new single — ​”It Ain’t Over​”. How did this particular song become the first release of 2020?

This song really is a stream of consciousness. It’s almost a ‘preach to ourselves’ kind of thing about discouragement, and the challenges you face on the daily, but the positive uptake when you realize that it’s not over. It felt timely, especially within the current state of the world.

What were the talks like going into the making of the new EP? Where did you see your music going?

We definitely drew musical inspiration from some of our favorite artists and wanted to find a distinct lane that our music could survive in. Lyrically, we try to maintain a thread of hope running through each song…that being said, we don’t necessarily try to put it in there, we just let the song go where it needs to. We agreed on the direction of this album and really communicated the desire to pull back on some of the world influences and insert some additional modern overtones while keeping to our vision of avoiding the ‘rules’.

When artists are able to tour again, will Via Barcelonia hit the road and debut these songs live?

Absolutely! We LOVE playing live, and LOVE getting our audience up and moving to the music. We wish we could be out there now playing, but until then, we’re continuing to write, produce and create online content while releasing the new material.