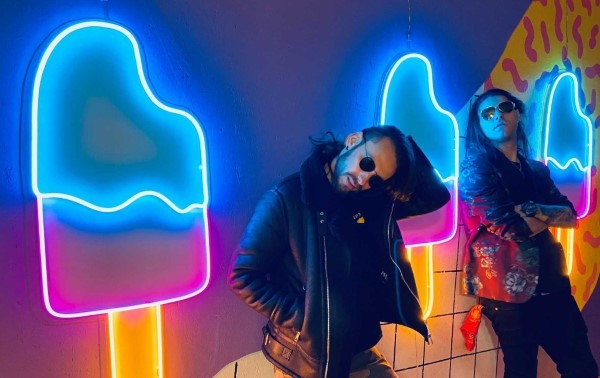 Montreal, QC-based band, ORCHAD (pronounced OR-CHID) is made up of musicians, Julian Della and Justyn Vynn. The duo has unveiled their new single, “Critically Ashamed” along with a video for the release.

Filmed in HideSeek Pop-Up Shop, “Critically Ashamed” is a satire on the use of social media as a measure for success. Lifestyles are dictated by social networks and the majority of their content intended to feign accomplishment and to highlight a life that seems to be perfect. As a band, the duo wants to stay true to themselves and not distill their value as humans down to social influence.

We’d love to! We’re ORCHAD (pronounced like orchid), a two-member Rock band based out of Montreal, Canada. We formed in 2018, and you can find all our releases on Spotify, Apple Music, or any digital streaming service!

Musically we take influences from all artists and genres but you could definitely hear the root of our music is influenced by rock. We have Pop based melodies with precision guitar and hard drums laying down a groove that gets your head banging and your feet dancing!

Due to COVID-19, we don’t have anything planned for shows, but we’re looking forward to the time when we are able to get out there and play again. Our live shows can be described as energetic, and electric! A lot of energy, and enjoyment happening!

Being completely honest, the song that best represents ORCHAD  right now is our latest single “Critically Ashamed” which drops July 31st. It’s a rock song but has those pop melodies, you can hear the influences, but it’s still fresh, we experimented with a few things on this song, and we’re exceptionally proud of it. It truly represents the spirit and energy the band has. Other tracks you can check out now would be Vanity,  and Well on the Way

We have a bunch we individually love, but together: Palaye Royale, Billy Talent, Bryan Adams, April Wine, The Weeknd, just to name a few!