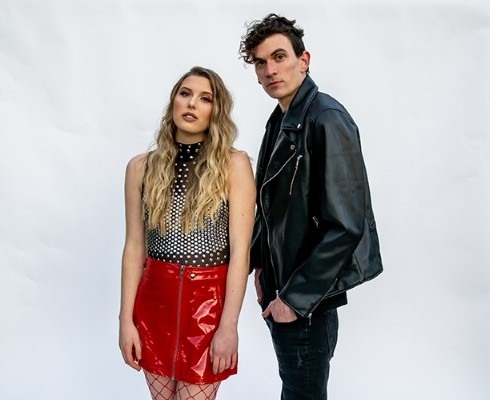 Canadian pop artists Kelly & Gibson continue to fête their debut EP, Affinity, as they were recently announced semi-finalists in the 2020 Unsigned Only Music Competition.

The four-track album’s most recent single, “Get This Right,” was the second song the Vancouver-based duo of Chris Kelly and Nicole Gibson penned for the project and speaks volumes on the album’s thematic muse.

“In general, we were very inspired by relationships for this EP,” they offer. “We wrote ‘Get This Right,’ in particular, after a night spent talking with friends for hours about past relationships we all had, current long-term ones we were in, and what makes relationships work in the long run.”

This song is about how people come into relationships with scars from past loves and life experiences,” Kelly adds of the track. “It’s about how a big part of relationships are just learning how to coexist with those things in each other.”

Relationships aren’t a fairytale,” Gibson nods. “They aren’t easy, but the good ones are worth the work and the hard conversations in the long run.

Getting through those things with someone, and being able to move on, is really what makes the magic happen.”

Check out “Get This Right” below and find out more about Kelly & Gibson via our Five Questions With segment.

Hi, we’re Chris and Nicole, also known as Kelly & Gibson! We are a dynamic pop duo based in Vancouver, BC.

We met about 5 years ago when we were playing the same show at a bar in Montreal. After both our sets we instantly connected and sat and chatted for like 5 hours at the merch table.

Eventually, we started writing music together and although we tried out lots of different production styles, from folk to super dark pop, we were always writing pop music when you stripped it down to its core.

We recently released our latest 3 song EP Affinity, with the help of Creative BC’s Amplify program, which is all about relationships.

We’re definitely in the genre of pop!

For our latest EP, we were lucky enough to work with Nygel at NYG Productions and it was a very collaborative process between the three of us.

A lot of the times, when writing for this EP, we would think of interesting words or lines of text and then bring them to the studio, where we would work on a melody and song concept around them.

For example, our first track ‘Why Do We Love Like This’ just started out with that line of text.

Nygel thought of the line and wrote it into the notes of his phone in a parking garage. When he said it aloud during our brain dump of words and interesting lines at the beginning of a session, we instantly were captured by it and the concept of it. Then we all started singing it and found a cool melody for it and worked from there.

We are announcing a few live stream shows soon! One of them is part of Creative BC’s Showcase BC program, which we are stoked to be a part of. We also have some other live-streaming gigs we are announcing throughout August.

We have a pretty high energy set!

Nicole sings and Chris sings and plays guitar, keyboard synth and does sampling as well!

I think our song Chasing Feelings. That was the last song on the EP that we wrote and was also the hardest to write. We had like 10 different choruses for that song and so many 8 hour writing sessions where we kept hitting dead ends with it! But it all just worked out in the end. We also did a really fun music video for the song with the concept being ‘chasing the good feelings’, which we filmed at our apartment because our first shooting location got shut down by the cops after 3 hours of set up and only 1 shot being filmed. At least now we know you need a filming permit.

Nicole – Mother Mother is like everything. Probably my favourite band ever. I feel like I grew up on so many Vancouver based bands because I would always be running around to their concerts in the city as a teen on the weekends. Dan Mangan is another classic and Tegan and Sara, they were the first concert I ever went to, it was at Malkin Bowl and it poured rain but it was magical

Omg, I used to burn their CD’s and listen to them NON stop, I know like all the words to every album they have ever done.

Chris – City and Colour, I have admired Dallas Green for so long.