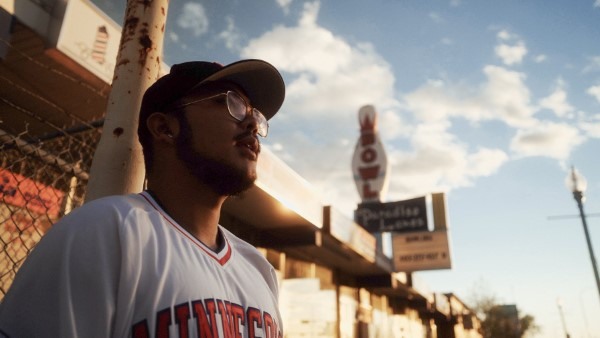 “When creating lyrics, I sometimes like to use objects as metaphors to dig into other topics” explains Lyrique. “In this case, I’m comparing the sensation of a drug-induced daze to the feelings of being in love.”

The video for “Smoke Break” was shot in the Forest Lawn and Bridgeland neighbourhoods of Calgary. The hypnotic video features various area landmarks that serve as a shout out to the rapper’s adopted city.

“Calgary doesn’t get enough love when it comes to hip hop” Lyrique adds. “With artists like Cartel Madras getting some attention outside of the city, that perception is slowly shifting.”

The video follows the release of a series of singles and mixtapes from the artist since 2016, which have drawn attention from outlets such as COMPLEX, CBC’s Q, MTV Philippines, and more. Lyrique takes cues from the melodic rap vibes of Chattanooga, Tennessee’s YGTUT, and Black Hippy crew member Isaiah Rashad and the moody R&B of Aaliyah while carving out a lane of his own.

Lyrique arrived in Canada in 2014 to work as a live-in nanny, Lyrique’s rhymes often draw from his personal struggles as a temporary migrant worker. Now a permanent resident striving to fulfil his dreams, Lyrique’s story is one of many within Canada’s Filipino diaspora. Over the past few years, Lyrique has shared bills with JPEGMAFIA, Chali 2na, Tyga, Fetty Wap, and fellow rising Calgary-bred acts Cartel Madras and Too Attached. He has also made festival appearances at Sled Island Music & Arts Festival, and more. Lyrique’s debut full-length album will be announced later this summer.

Share this:
Related ItemsAlbertaAlberta MusicCalgary ABLight of Day PublicityLyriqueSmoke Break
← Previous Story JoJo Mason once again is ready to hit the ground running with the release of his new single, “Chemical”
Next Story → Weekly Beat Down – July 27, 2020 to August 1, 2020