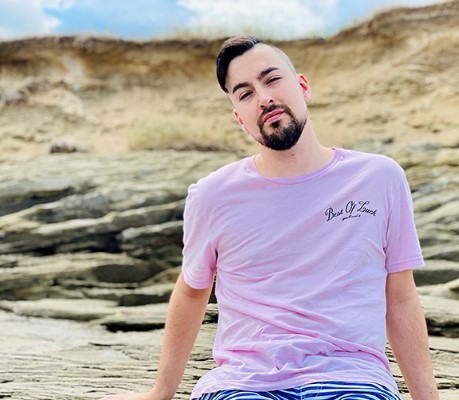 A timely preview to his forthcoming sophomore album, Matter of Time — an upbeat pop explosion with contemporary electronic sounds set for release this August — the video for “Summer Sun (Nothin’ on You)” was shot entirely on an iPhone 11 Pro at L’Aboiteau Beach across two picture-perfect days.

“This song was inspired by our east coast’s beauty during such a beautiful season,” he shares of the origins behind the track. “And now, it’s even better as restrictions are being lifted and people are starting to emerge from quarantine to be with their loved ones.”

The album follows suit, Maynard shares. “Matter of Time speaks to the 2020 timeline of our world. I hope to bring an optimistic outlook to people through music, and give everyone something to smile about.

“With so much going on, I wanted to give people something they can dance to,” he adds. “Something that will help them forget about their problems.”

Check out the video for “Summer Sun (Nothin’ on You)” below and find out more about Ryan Maynard via our Five Questions With segment.

Hey guys! My name is Ryan Maynard and I’m a recording artist from Moncton, New Brunswick! I’ve been singing since I was very young – ever since my grandparents bought me a little toy recorder. I’ve always loved pop music. I grew up listening to Britney Spears and Destiny’s Child while most people around me were listening to country and bluegrass music. I was a DJ and karaoke host for a while and I’ve guest-hosted and judged more than a dozen singing competitions around New Brunswick over the years. I’ve always enjoyed helping other artists develop their abilities.

My first studio album was released back in 2018 and received three New Brunswick Music Award nominations including Solo Recording of the Year, Visual Identity of the Year and Fan Favourite, and I’m super excited to be releasing my second studio album called Matter of Time which will be out in August! I have a new single out right now from the album called ‘Summer Sun (Nothin’ on You)’, I love to sing and dance, I can rap, I edit my own videos, write all of my own songs and mix them myself! I have two Siamese cats, a wonderful boyfriend and I love sushi.

I make contemporary pop music! You could call some of it dance-pop or electronic music as well. I’m influenced by producers from so many different countries and genres around the world. It inspires me when I’m writing new material, to incorporate those sounds from different musical cultures – because then you end up with something totally new and unique-sounding that’s on the cutting edge of what’s out there but that still has that pop flavour with catchy lyrics that get stuck in your head!

I tend to write about the world around me and the things I’m going through. A lot of the songs on the album are me taking a negative situation and turning it into something positive. For example, Summer Sun is about how beautiful the summer is – but also about how it doesn’t compare to the feeling of being reunited with a loved one after being stuck in quarantine for so long, being able to enjoy that sun together again. It’s about emerging from tough times as a stronger version of yourself. It’s also reminding people that it’s okay to feel good about that because we all need something to feel good about in 2020.

My music is honest and authentically me in every song. It’s either about something that really happened or it’s about things I think about. Either way, you’re hearing my story directly from the real me and I think people will appreciate that about my music.

I don’t have any upcoming shows at the moment due to COVID-19, however, there are still some plans in the works. My live performances are full of energy. I have never had someone call my show boring, even if they didn’t like the music, because it’s just not something someone could say. I like getting people excited. I love to dance and even if I wasn’t performing for an audience, I would still dance when I sing because that’s just what I enjoy doing even if I’m alone. You could say my level of energy was designed for entertainment.

Everyone always mentions ‘No Turbulence (Home)’ from my first album ‘Welcome to Utopia’ as being that groundbreaking song that represents my music. It’s about moving to a new city and regretting it, realizing you were already ‘home’ and should’ve stayed. Some people move for the right reasons, but there was a time in my life where I wanted to start a new life and it made me realize how much I love where I’m from so I moved back to the east coast. Hearing that probably makes it sound like it would be a more emotional song, but it’s an uplifting pop anthem that has an almost pop-rock vibe and a beat that gets people pretty pumped.

So many great artists have come out of Canada! The ones I really love listening to right now include Justin Bieber, Shawn Mendes, Alessia Cara, Carly Rae Jepsen, Joni Mitchell and Feist… To name a few. They’re all fantastic. Canadians just know how to make great music!