Five Questions With The Actual Goners 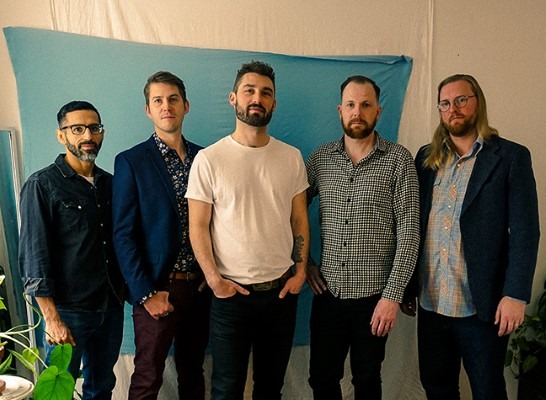 “It’s an attempt to verbalize the feelings of restlessness I’ve experienced throughout my life,” says co-frontman Duncan Symonds of “Cannonball,” a track hoers.de fittingly dubbed a “perfect soundtrack for a road trip.” “It’s about moving from one place to place, leaving behind people and relationships, all while trying to maintain a sense of purpose and routine in the shuffle.

Five years ago, I was living in Louisiana and travelled between New Orleans and Baton Rouge regularly on a Greyhound bus,” he continues. “On one hand, it was the least exciting part of my time there but, on the other hand, it represented so much of the ‘coming and going’ and urgency I’d felt.

I’d listened to the music of New Orleans and Louisiana for some time and, ultimately, that’s what had called me.”

There are a couple of nods to those inspirations in “Cannonball,” Symonds explains, including the main riff reminiscent of cajun slide guitarist Sonny Landreth, and a drum groove summoning sentiments of legendary funk drummer and founding member of The Meters, Joseph Ziggy / Zigaboo Modeliste.

Check out the live version of “Cannonball” below and find out more about the band via our Five Questions With segment.

Greetings from the Big Smoke! Tristan Armstrong of The Actual Goners here. Thanks for having me back to chat about the band’s newly released self-titled EP.

We recorded our debut “Henhouse Sessions” with Steve Dawson down in Nashville in 2018. That one and the next, “Curbside Finds” were more in the rootsy/rustic realm. On this latest release, under the guidance of producer Aaron Goldstein, we’ve turned up the volume and taken the sound more into rock territory. We’re very happy with the sounds we got. There’s still pedal steel and acoustic guitars present, but Aaron succeeded in bringing a rock & roll energy out of us in the studio that’s more reflective of our live show these days. Recent reviews have compared the sound to Gin Blossoms, The Hold Steady, and Tom Petty.

Nothing beats being together and playing on a big stage. Something I love about playing live shows with The Actual Goners is how we all feed off of each other’s energy on stage. We’ll look over and see Phil pounding on his bass, hair flying this way and that, and it just brings everyone up a notch. It’s an experience of pure joy making music together.

Since the band formed three years ago, we’ve kept busy on the Toronto scene. Our last show before the start of the COVID-19 pandemic was a very fun sold-out night at Rivoli. I was sad to see the venue be put up for sale recently. I hope its new owners will be able to keep live music going there. It’s always painful to see music venues closing down, especially ones that have been such important gathering places for Toronto musicians. We’ve done a few streaming shows since March, and recently put out a distanced live performance video for our latest single “Cannonball.”

“Diamond Dust” and “Cannonball” are the singles from the new EP, but I think my favourite track might be “Lost Highway.” The guitar riff is one that I’d been sitting on for about ten years, so it feels fulfilling to finally hear it back on a record. The song has always felt a bit mysterious to me, and I think we were able to capture that in the recording. The mood, tones, and groove all came together really well. Duncan Symonds (co-bandleader, songwriter) laid down some really tasty pedal steel playing on the track, and our pal Joel Visentin sat in on Hammond organ.

We in the band have always listened heavily to Canadian artists big and not so big. A couple that we’ve been digging are Half Moon Run and Terra Lightfoot. There’s a personal connection to Half Moon Run in that Duncan’s brother Isaac played in the band for years. Duncan himself used to play in a band with Conner (of HMR) when they were kids on Vancouver Island. They just put out a great EP called “Seasons of Change.”

Terra is a great songwriter and killer guitarist. Her music is real-deal rock. I’d also recommend checking out Altameda and Huttch for your summer listening.