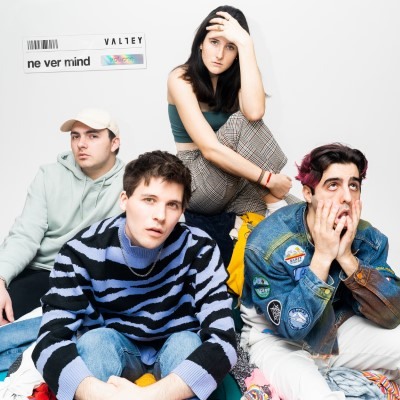 When talking about the track “nevermind”, each member of the band adds a little something that stands out to them.

“I feel like with Valley we’ve always strived for the perfect happy and sad song. ‘nevermind’ is a direct representation of playing with that idea. The song covers a stricter mental health narrative but also leaves the listener room to feel high energy production-simultaneously processing a topic about trying to find an emotion that doesn’t really exist.”

According to Karah James (vocals/drums),  “nevermind” is

“a song about the cyclical feelings of self-pity, apathy, and being an introvert.  It describes wavering between a romanticized version of your life and the ’sad’ reality of it.” Guitarist Mickey Brandolino adds that they “always have so much to do and as creatives have constant bursts of motivation and many lows as well. We happened to find motivation to write a song about the lows, which is ironic in itself.” Ultimately, Alex Dimauro (bass) sums up the track as a song that “melodically and lyrically summarizes a feeling felt throughout much of our generation. It’s like throwing on an episode of a show that revolves around one plot: constantly looking for the next best thing.”

Valley has “spent the past two years developing and becoming one of the top internationally streamed Canadian-domestic acts worldwide.” The release of their debut LP MAYBE in September 2019 secured them a JUNO Award nomination. With the release of “nevermind”, they are well on their way to more success.